by Ben-G; Ethan A. Cooper 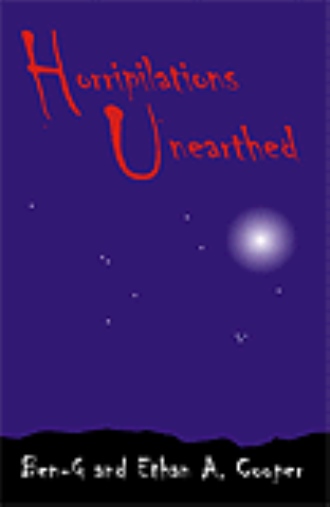 Six tales, all freshly unearthed for you to devour in haunted night hours.  Six tales, each one birthing a new form of terror.  Six tales, with heroes of light and monsters of darkness.  Six tales, but one goal.  To make you afraid of that monster lurking under your bed.

A Meating Of Chance - He was just a bum looking for a handout.  Unfortunately, he got one.  This little horror reminds us that it is better to give than receive.

Bloodsuck - As the sun sets and twilight comes, our rebellious young hero is caught in the dark—but not quite alone mind you.  Wishing on this particular night’s stars can be bad for one’s blood supply.  But no one told our hero.  Too bad for him.

Living Specimen - Science is a two-edged sword.  When these five scientists are caught holding the wrong end of it—well, you know.  Let’s just say that no cat was ever accused of being man’s best friend.

Mindblank - Ever wanted to just think about nothing?  No worries, no nothing?  Wouldn’t that be great?  After reading this twisted tale of sibling rivalries unleashed, thinking will be the furthest thing from your mind.  That is, if you even dare.

Infest - Did you ever hear your mother speak these words of wisdom?  Every choice has consequences.  Play with fire and eventually you’ll get burned.  Never grab a snake by its tail.  Don’t run with sharp objects, or you’ll poke somebody’s eye out.  Never summon blasphemous beings with dead animal skulls.  Apparently, the two young heroes of this particular horror forgot about that last one.  Guess they should’ve listened to mommy...

Creepwake - It’s time to go to camp, boys and girls!  There’ll be tons of fun stuff to do—swimming in the lake, toasting marshmallows, and trying to stay alive!  So come on!  This little frightener is for those of you who like to get back to nature.  Just pray that nature doesn’t want to get back to you.

Born and raised in southern California, Ben-G and Ethan cut their teeth on a steady diet of sci-fi/horror movies, cartoons, and comic books. While not haunted by nightmares of Darth Vader or invading space aliens, they were listening to The War of The Worlds by H.G. Wells on their father’s record player. The constant influence of radio suspense dramas like The Shadow and X Minus One only furthered served to warp their impressionable minds. Both are college educated and hold jobs in technical fields. Together, they helped bring the independent horror trilogy Goggles 1-3 into existence. Ben-G lives in California and is the creative force behind the industrial hardcore band Zebulun. Ethan and his wife reside in Texas where they are both scared of tornadoes. Ethan also contributes to the online cyberpunk serial DOWNfALL.