POEMS ACROSS MY PATH 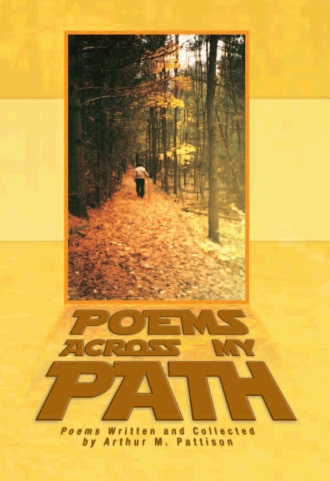 The poems in this book arise out of a small business I started as a hobby, called “FRAMEABLES” when I put poems I wrote, adapted, and collected on various attractive papers and plaques, and then sold them in various Christian Bookstores in Ottawa, as well as other stores from Toronto to Montreal. Most of these poems are still available on attractive papers and plaques for anyone interested in contacting me at . . .

Born in Ottawa in 1940, I graduated from Nepean High School in 1959, and from Carleton University in 1965. In 1965, I began a teaching career at Rideau High School in Ottawa. In October 1966, I met Freda Estabrooks at a Presbyterian Youth Weekend in Markham, Ontario when I was asked to be a Resource Speaker. I was immediately attracted to her. As I drove Freda back to her billet's home that night, I asked her three big questions (which were important to me at that time.) “Do you go to dances?” ( - a no-no for many narrow Christians). Her answer was, "Just to Formals". Wow ! . Secondly, I asked, “Do you go to movies ?” ( - another no-no for many Christians in those days). Her answer was, "Just to Musicals". Amazing ! Then I asked the most important question of all, “Are you Calvinistic in your theology?” (- something most Christians knew nothing of, or if they did, were against it.). Her answer was, “Yes, I believe in Calvinism and predestination". (- a theology I had unsuccessfully tried to disparage during my years at university). I immediately knew she was the girl for me! ( Unknown to me, when she re-joined a girl friend at her billet's home that night, she told her that she had finally met “the man of her dreams”.) The rest is history ! At that time Freda was teaching at an Elementary School in Toronto so we didn't see each other very often. However she came to Ottawa the following New Year’s to meet my parents (just before my approving mother died). Later that month, I met her parents in Peterborough. Having obtained her father's approval, that February, on snow- shoes and in knee-deep snow in the chapel at Camp IAWAH (near Westport, Ontario), I asked her to marry me. To my delight, she agreed ! We were married the following August in Peterborough, a long 10 months after finding each other. After a week’s honeymoon in the Laurentians, she began teaching at an Elementary School right next to the High School at which I was teaching in Ottawa. Two years later, we moved to Toronto where I enrolled at the University of Toronto’s Knox College. Freda happily financed my three years of theological studies by teaching at a downtown school in Toronto. Upon graduating in 1971, we accepted a call for me to be the minister at Essa Road Presbyterian Church in Barrie and Stroud, Ontario. Three years later we returned to Ottawa where I became an Assistant minister at St Andrew's Presbyterian Church. After two years, with a degree of disillusionment with Church polity and theology, I returned to teaching Math and Science in various Ottawa High Schools for the next 25 years, - still remaining active in church work, doing pulpit supply, with occasional marriages and funerals. Over the years, we have been blest with four wonderful children (an Executive a well known drug company, an Aerospace Engineer, a Teacher and mother, and a co-owner of a small computer company designing web-sites). After our youngest was well along in elementary school, Freda was able to obtain an occasional and then a permanent teaching position with the school our children attended, the Ottawa Roman Catholic Separate School Board. She taught there for 15 years before retiring in 2003. Since then, Freda has been diagnosed with Alzheimer's Disease. We continue to enjoy our golden years, but struggle together with her increasing short-term memory problems. However, this terrible disease has not affected Freda’s gracious, warm and bubbly personality. She continues to complete my life as a wonderful source love, affection, and inspiration.