The Strategy of John Boyd, Applied to Business 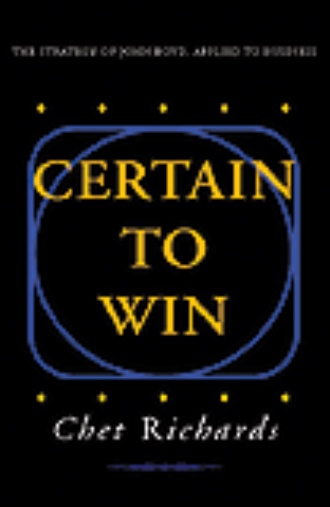 "The book is both an excellent primer for those new to Boyd and a catalyst
to those with business experience trying to internalize the relevance of Boyd´s thinking."

Certain to Win [Sun Tzu´s prognosis for generals who follow his advice] develops the strategy of the late US Air Force Colonel John R. Boyd for the world of business.

The success of Robert Coram’s monumental biography, Boyd, the Fighter Pilot Who Changed the Art of War, rekindled interest in this obscure pilot and documented his influence on military matters ranging from his early work on fighter tactics to the USMC´s maneuver warfare doctrine to the planning for Operation Desert Storm. Unfortunately Boyd’s written legacy, consisting of a single paper and a four-set cycle of briefings, addresses strategy only in war. [All of Boyd´s briefings are available on Slightly East of New.]

Boyd did study business. He read everything he could find on the Toyota Production System and came to consider it as an implementation of ideas similar to his own. He took business into account when he formulated the final version of his “OODA loop” and in his last major briefing, Conceptual Spiral, on science and technology. He read and commented on early drafts of this manuscript, but he never wrote on how business could operate more profitably by using his ideas.

Other writers and business strategists have taken up the challenge, introducing Boyd’s concepts and suggesting applications to business. Keith Hammonds, in the magazine Fast Company, George Stalk and Tom Hout in Competing Against Time, and Tom Peters most recently in Re-imagine! have described the OODA loop and its effects on competitors.

They made significant contributions. Successful businesses, though, don’t concentrate on affecting competitors but on enticing customers. You could apply Boyd all you wanted to competitors, but unless this somehow caused customers to buy your products and services, you’ve wasted time and money. If this were all there were to Boyd, he would rate at most a sidebar in business strategy.

Business is not War

Part of the problem has been Boyd’s focus on war, where “affecting competitors” is the whole idea. Armed conflict was his life for nearly 50 years, first as a fighter pilot, then as a tactician and an instructor of fighter pilots, and after his retirement, as a military philosopher. Coram describes (and I know from personal experience) how his quest consumed Boyd virtually every waking hour.

It was not a monastic existence, though, since John was above everything else a competitor and loved to argue over beer and cigars far into the night. During most of the 1970s and 80s he worked at the Pentagon, where he could share ideas and debate with other strategists and practitioners of the art of war. The result was the remarkable synthesis we know as Patterns of Conflict.

Chet Richards was a close associate of the late US Air Force Colonel John Boyd beginning in the mid-1970s. He has consulted with a number of aerospace and professional services companies and has lectured at the Air War College and the Army’s Command and General Staff College. He is the author of A Swift, Elusive Sword and other works on applications of Boyd’s strategy. Chet holds a Ph.D. in mathematics from the University of Mississippi and maintains a business and communications strategy practice with Tarkenton & Addams, Inc., a public relations firm in Atlanta, Georgia.