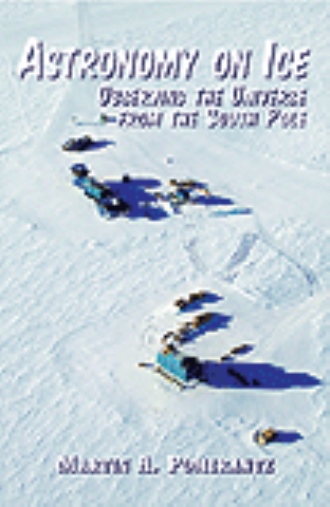 Astronomy On Ice: Observing The Universe >From The South Pole Martin A. Pomerantz The story begins in 1930 with a Tenderfoot Boy Scout's first contact within hailing distance of Commander Richard Byrd and Eagle Scout Paul Siple, both seated in the back of an open limousine, in a ticker-tape parade through Brooklyn honoring their return from their first trip to Antarctica. The story ends with the author's final observing campaign at South Pole Station in 1994, and the dedication of the Martin A. Pomerantz Observatory by the Directors of the National Science Foundation and its Office of Polar Programs. The narrative is not strictly autobiographical, but it does unfold through events and personal choices of the author, along with the history of the science, the evolution of the cutting-edge astrophysical enterprise that is the centerpiece of the research program at the U.S. Amundsen-Scott South Pole Station. From his first taste of physics to his last trip to the South Pole, Astronomy on Ice presents, at a level aimed at an educated public, the scientific research the author carried out over 50 years, concentrating on his efforts to arouse interest within the astronomical community in the unique scientific resource offered by the South Pole. In the face of the initially cool reception of his idea, he conducted a number of experiments, first bootlegged and later sanctioned, with outstanding U.S. and foreign collaborators in multiple fields: solar astronomy, submillimeter astronomy, ultra high energy cosmic-ray and gamma-ray astronomy, and millimeter measurements of the microwave cosmic background radiation. These experiments proved the singular advantages of working at the South Pole for each of these astrophysical subfields . With instruments on the ground, on ships, aircraft, aboard balloons, and even on an early satellite, the author's cosmic ray research carried him to the sub-polar and north polar regions, as well as to many other sites around the earth. These experiences led to his initial Antarctic research in 1960, when he established the first year-round cosmic ray detector at McMurdo Station. In his initial visit to South Pole, during the first of 26 austral summers in Antarctica, the author recognized a number of potential advantages of this unique site for certain types of astronomical observations. Although preliminary tests, published in Polar Research: A Survey in 1970 by the National Academy of Sciences Polar Research Board, supported the idea, it was not until 1979, after numerous rebuffs, that the first authorized solar astronomy experiment proved that South Pole was the best site in the world for the new field of solar seismology: probing the sun's heretofore invisible interior by "listening to its ringing." Collaborating with both domestic and foreign experts, Pomerantz then conducted first-time campaigns in other subfields of astronomy, each revealing that South Pole was better than anyplace else on earth for conducting their specific types of astrophysical research. Paradoxically, manifold advantages stem from working at the earth's remote rotational axis, atop the extremely cold and forbidding 9300 feet deep polar ice cap, at a pressure altitude of about 12,000 feet. The scope of fundamental problems studied at South Pole ranges from the nature of earth's electromagnetic environment, to conditions throughout the sun's atmosphere and interior, to stellar evolution, to exotic physical processes in and beyond our galaxy, to the beginning of structure in the Universe after its birth in the Big Bang.