Antioch College and the Social Sciences

by Richard A. Couto 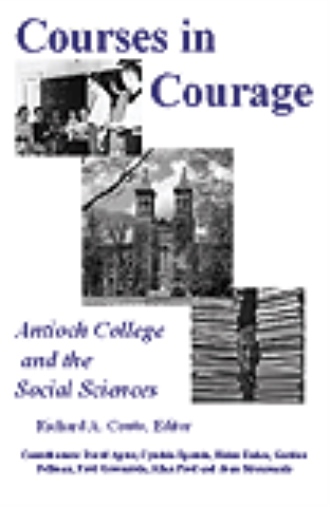 During the 1950s [an] extraordinary group of intellectuals entered social science and helped to remake both it and the larger social world. Though they were exceptional individuals, they were also the products of impressive social institutions. One of the most important was Antioch College, and it is on this formative environment for courage as well as creativity that the scholars writing in this book reflect. Their essays are telling and stimulating. They should be assigned to all undergraduates considering careers in social science, and they will repay the attention of graduate students and professors.

Antioch’s interdisciplinary approach to the social sciences at mid-century was remarkable. Knowledge was to be "constructed" not "learned." Collaboration was encouraged. Everyone was expected to do outstanding work. Social goals and values were central to all of the discussions. These papers and the remarkable careers of the authors illustrate the extraordinary power of this educational approach.

- Mary Field Belenky ’55.
Co-author of Women’s Ways of Knowing and A Tradition that Has No Name.

This is a book for those teachers who see themselves as mentors and leaders.

- Warren Bennis ‘50, Author of On Becoming a Leader
Distinguished Professor of Management, University of Southern California

These Antiochians have kept their focus on the critical question for social scientists: What do we want from democratic institutions?

The six contributors to this volume have achieved national and international acclaim for their scholarship. They hold or have held prestigious positions at some of the best schools in the United States. Earlier than other social scientists did, they explored emerging areas of study such as—gender equity, political violence, peace, and conflict—and shaped these areas for the current generation of social scientists and those to follow. Their interdisciplinary, problem-centered, and rigorous scholarship has brought them the accolades of their professional and other scholarly associations.

These six contributors came together on October 24, 2003 at Antioch College as representatives of the post World War II period when Antioch was a nebula that fashioned intellectual, cultural, and political stars. They reflected on their personal backgrounds, their scholarship, and the role that Antioch College had in building on the first and training for the second. In these pages, they speak to an element of the social sciences often ignored—courage. They address the place of values in social science, the challenges they addressed in their careers, and the challenge for future social scientists to continue interdisciplinary, problem-centered, relevant, and rigorous scholarship.

As we look at our own times and the dark firmament of preemptive warfare, terrorist threats, the erosion of the middle class, the assault on civil liberties, and current reduction of social guarantees for the well-being of each other—summarized by Garrison Kellior as “the mean-spirited betrayal of the common life—these essays shine with a light of direction, courage, and hope. Whatever the achievements of the contributors, and they are large, all of them would agree that their luster matters most if they inspire this and future generations of college students and their teachers to dare to hope that they may have some victory for humanity to write about fifty years hence.

Richard Couto is a founding faculty member of the Antioch Leadership and Change PhD program. His most recent publication is To Give Their Gifts: Health, Community, and Democracy.