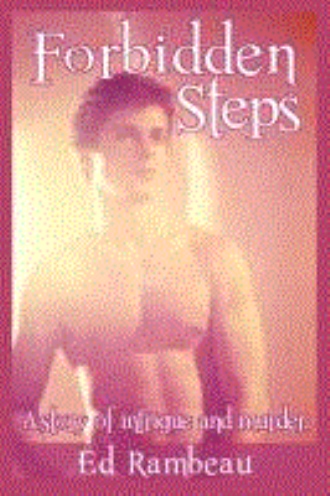 Chad Kipton is a 22-year-old top male model returning home for his father’s funeral and has no idea what’s in store for him as he comes face to face with his fears, and eventually suffers the ultimate punishment for his passion. His stepmother, Vivian, also isn’t aware of what terror lies ahead when her beloved husband, Frank, dies suddenly of a heart attack, and her youngest stepson—17-year-old Danny—becomes tangled in a web so cleverly woven that he becomes blinded by his hatred. After the devastating event that took the life of Frank’s first wife, Margo, Vivian made it her goal to snag Frank, the love of her life. All was going well until Chad returns home. Just when you think you’ve heard it all, things go topsy-turvy in this unbelievable twist of events as Vivian finds herself accused of two murders. Was she involved? Shelly, her alcoholic sister-in-law, strongly believes so—but is she right?

Just finished reading Forbidden Steps and loved every sentence of it! This was a fun novel to read that had my head spinning from the beginning right until the unexpected end. The story is a quick and easy read full of romance, mystery, murder and sex. There are so many twists and turns, I found myself giving up on trying to guess the end and just went along for the crazy, intense ride! As a first time novelist, Mr. Rambeau captured my attention right from the start and held my attention until the very last word, at which point, I honestly wanted more. One can only hope there will be a Forbidden Steps Part 2!!! I highly recommend Forbidden Steps and eagerly await Ed Rambeau's next novel.

Wow! Wow! Wow! What a page turner! You CANNOT put it down. The storyline is so fresh and so well-written that I never saw any of the 3 amazing twists coming, and they were not only unexpected, but all mind-blowers. Can't wait to see the movie.

Many talented people have found a measure of fame and fortune through fields such as acting, singing or songwriting; some show talent and proficiency in more than one endeavor (i.e., singers who write their own material). But not every artist is multitalented. Vocalists whose acting performances were panned by critics, or actors whose recordings made them laughingstocks rather than chartbusters, will attest to this. There are, however, exceptions, and Ed Rambeau, best known for his achievements in pop music, is such an exception. Rambeau's debut novel, a murder mystery entitled FORBIDDEN STEPS, is Exhibit A, proof beyond a reasonable doubt that Rambeau is one of those gifted entertainers who can more than hold his own in just about any field of the arts. Actually, STEPS should more properly be designated as Exhibit H, for prior to its release Rambeau had already established a solid name for himself as a songwriter, singer, actor, producer, arranger, photographer, and artist. Rambeau was one of the composers of the hit single "Navy Blue," as recorded by Diane Renay in 1964, and gained fame as a recording artist whose version of "Concrete and Clay" made the U.S. Top Thirty a year later. These are just two highlights from a career that has spanned decades and includes many facets of show business. Now, Ed Rambeau can proudly add "author" to the j

Ed Rambeau was born in Hazleton, Pa. and started his career in the music business in the early 1960s. He had National hit recordings, one as a singer in 1965 entitled Concrete and Clay, and also as a songwriter in 1964 with his top ten hit Navy Blue recorded by Diane Renay. Since then he has dabbled in all art forms and has been referred to by many as a true Renaissance Man. He has appeared on such TV shows as Dick Clark’s American Bandstand, Shindig, and many others, as well as an actor on the TV soap opera “The Guiding Light”. FORBIDDEN STEPS is his first novel, but we expect to hear a great deal more from this fine new author.