Prepare Or Despair-It's Your Choice 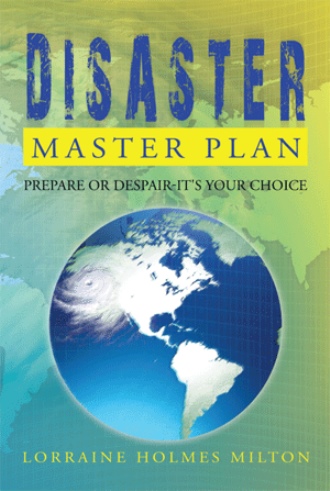 This book, Disaster Master Plan: Prepare or Despair – It’s YOUR Choice, was written to give information to my fellow citizens on “How to” plan for a disaster and where to order disaster kits. I want everyone to have relevant information that they can use, in advance, to prepare their families, neighbors, and businesses, in case of a power outage or disaster. I witnessed Hurricane IVAN (2004) devastation in Pensacola, Florida when it slammed into the Gulf Coast. I stood in long lines on that September day in sweltering heat; I was hot, sweating, and tired. I was frustrated because the lines were a mile long while we stood in line waiting for FEMA and the Red Cross to give us basic supplies, i.e. ice, water, milk, etc. They worked tirelessly with a smile on their face, trying to cheer us. They knew many of us had lost our home. I thought it was be great if I could put together a disaster preparedness kit, in case, this happened again we would be ready. PLEASE PREPARE FOR DISASTER! Hurricane KATRINA (2005) was a catastrophic hurricane which ruthlessly and horrifying demolished the Gulf Coast with raging floods from New Orleans to Mississippi and until this day some of the building have not been rebuilt and many of the residents did not return. GOALS(1) Provide information to everyone on how to prepare for disaster. (2) Assist in revitalizing Detroit, East Side Jefferson Street, from Grosse Pointe to Belle Isle Park.