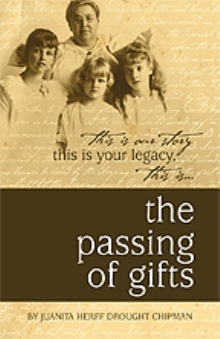 Grieving the sudden death of her beloved husband a few years after they lost their first child, Eda Kampmann Herff picks up an abandoned ledger and starts writing a Diary on the first day of 1884. A century later, her granddaughter, Ilse Herff Frost yields to a grandson’s pleading and writes her Reminiscence. She recounts growing up in South Texas – Boerne and San Antonio – in the early 20th century. These two women are descendents of J.H. Kampmann, one of the 19th century German settlers who brought their enterprise, culture and utopian ideals to the vivid Mexican city of San Antonio. JHK was a dynamic civic leader. He built several of the classic German houses in the city’s King William District, along with now-historic business buildings downtown like the Menger Hotel. He also founded two breweries and a bank that later became a significant cornerstone in the Frost Bank organization. Eda was JHK’s daughter. She married a Herff, a son in a family of active physicians serving the burgeoning population of the young city. Herffs were among the founders of Boerne in Texas Hill Country. Eda records 30 months of 19th century daily life in her Diary as she raises her surviving son, participates in social and civic life, and travels. Ilse, JHK’s great-granddaughter, was a daughter of that son of Eda’s – known as “Johnny” or “Buby” Herff in her Diary. He eventually became another generation’s Dr. John Herff. Ilse’s Reminiscence details life two generations later as her family splits time between the city and the “ranch” in Boerne. These two documents are preserved through the efforts of two more Kampmann/Herff descendents. Judith Carrington is the granddaughter of Elizabeth – Ilse’s Aunt Elizabeth – who was born to the diarist, Eda, after she remarried. Judith found Eda’s Diary among family memorabilia hidden in her mother’s storage. Judith made the Diary available to The Witte Museum in San Antonio for an exhibit chronicling the early German settlers, including a special collection documenting J.H. Kampmann. A volunteer translator brought the lost document, written in old German, to life more than 100 years after it was written. Juanita Herff Drought Chipman – Johnny Herff’s granddaughter and Ilse’s niece – compiled the documents, added historic family photographs, and contributed sketches she drew from other, fading images, to create this book. These stories are valuable to the many descendents of South Texas’ German settlers. History records the accomplishments of their men, but the women of the families also carry an important story – bygone routines that kept homes running, raised children, and built community. Thank you for your interest in Eda & Ilse.