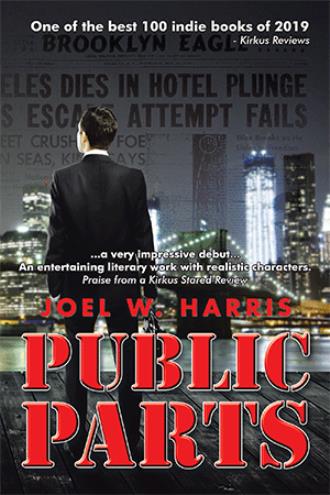 A failed escape? Or a Mob hit arranged by crime boss Meyer Lansky to silence him and save Lepke Buchalter, Bugsy Siegel and Albert Anastasia from the electric chair? Either way, Murder Incorporated hit man turned major crime snitch Abe "Kid Twist" Reles, "the pigeon who could sing but not fly," encountered the one law he could not evade: The Law of Gravity. Thirty years later in the early 1970s, Larry Levine takes over at PUBLIC AUTO PARTS, in Brownsville, Brooklyn, when his father is forced into abrupt retirement in Florida to avoid questions about the demise of his old friend, Reles. Someone is talking. Larry knows a little of his father’s link to the Mob, but not nearly enough, as he is left to face a relentless police detective, John Mannion, who wants answers and an equally relentless Mob boss, Carmine, who wants cooperation. While trying to protect his father, end Mob sway at Public Parts, deal with Laurie, his dissatisfied wife, and Ann Riordan, his new, beautiful, and enigmatic young assistant, the business burns to the ground. Indicted for arson and other charges, he is defended by Brownsville's own Harvard trained Bernie the Attorney, once a renowned Mob mouthpiece, now turned Orthodox Rabbi, whose time has long past. Ultimately, Larry’s fate is in the hands of his assistant, whose reluctant testimony about the extent of their relationship and where they were on the night of the fire could save Larry from prison but could also destroy her engagement and his marriage. PUBLIC PARTS is a black comedy of corruption and error cloaking a classic tale of love and betrayal, death and redemption; a might-be-true legend of its time and place, and Larry is the last man able to tell the tale.    PRAISE FOR PUBLIC PARTS “The writing throughout is good-to-better-than-good.” Richard Marek, former President and Publisher, E P Dutton Co “A Triumph.” Stefan Kanfer, former Book Editor, Time Magazine

A native of Brooklyn, New York, I attended James Madison High School and New York University. Creative writing was always a major interest, and I took several courses at both schools. Inducted into the army after a brief time at the New York Daily News, I was fortunate to get assignments that let me further develop and use what I had learned. After marrying my beautiful wife, Evvy, and in need of a steady income, I went into the insurance business. The brokerage office I joined had a clientele that was a colorful mixture of old world and new, including several businesses owned in part by the family of Meyer Lansky, who was our customer for a time. For the many years I worked there, first as an employee and eventually as the owner, I continued writing for my own enjoyment and to take further courses in the various skills required. If you want to study the skills required in storytelling, nothing beats the sudden talent evidenced when a client reports a claim. Even the dullest among them can be ingeniously creative when there is money involved. I learned a lot from them too. In September 1993, recuperating from back surgery, I started to write out the story that had been forming in my head for several years and which eventually became “Public Parts.”