The Story of St. Mary of Egypt 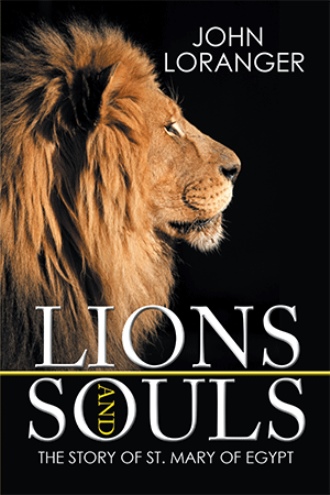 The Chesapeake Bay waters seemed a bit unstable this Monday, the third

week of October. The sky was partly cloudy, but the winds had been picking up

all morning. With a temperature in the upper seventies, Lester was soaked with

“Euh,” Lester grunted, working the nippers back and forth as he and Clayton

chuckled as his friend struggled with maneuvering the tool.

“Yeah! Whoa!” Lester screeched while hoisting a basket full of oysters onto

the craft. Both he and Clayton stood on a running board attached as part of this

vessel inside. Sporting gloves, they worked the nippers, which basically were

they could be moved back and forth. At the bottom of each handle was half of a

clawed two-foot-wide metal basket. As its wooden stems were drawn together, the

basket closed, functioning as a sort of giant tongs. Lowered in this shallow bay,

they would hopefully scoop up a hefty number of oysters.

“Looks like you got a nice load,” Clayton remarked as Lester maneuvered

the filled clawed basket to the rim and then to an open barrel to release his catch.

“A dang load of what?” Uncle Jacob eyeballed the questionable returns and

snarled as Lester emptied the contents.

Uncle Jacob was a crusty short, potbellied man with a raspy voice. He was

in his early sixties, and his appearance gave the impression of your typical sea

hair that hung to just above collar level. He always wore a dark navy captain’s

depiction. And of course, he always seemed to be toking on his pipe. Fishing and

the attire was something he thrived on and was in his blood throughout his life.

Lester snickered, causing him to almost miss the wooden barrel as the

what kind of scrap ya gave me,” he growled.

again back into water.

“Don’t go hittin’ me with those dang things,” the old man grumbled, ducking.

Clayton, who had been maneuvering his own pair of the devices in the

shallow bay, grinned broadly at his friend, who had again plunged the oversized

Now that another basket filled from the Chesapeake had been emptied, Uncle

Jacob would begin the process of culling the batch. First there would be separation

of the higher-grade from the lower-quality oysters. Then he would dislodge any

foreign substances before storing them according to their caliber in specific

wooden containers. Occasionally, a boat would come along and purchase the

fresh seafood, or they would be hauled to shore and bought by eager merchants.

“Here ya go, Uncle J.,” Clayton grunted, a bit of perspiration rolling down his

cheek as he hoisted his bounty over the side and into a barrel.

another haul being emptied.

“Ya boys are supposed to be bringin’ me up high-grade oysters, dang

gummit.” The veins in his neck stood out.

Clayton snickered and glanced at Lester, who had his back turned to him and

was focused on manipulating the cumbersome nippers in the bay.

“There’s some good stuff in there, Uncle J.,” he said jovially, peering again

at the old man.

The job of probing for oysters was trying and difficult. They would start

early in the morning and work all day to cultivate a plentiful supply. However,

to pay Clayton and Lester a reasonable wage. In fact, Lester was being paid an

average of $9.50 per week. That was more than he had made at the carriage shop,

and it allowed him to wire a good portion of it to Clara. The work was hard, and

he missed his family; but he wasn’t in a position to complain.

“Hey, Uncle J., can you get this boat to stop rockin’ so much?” Clayton

grinned as he teased glancing back at the old man from the running board.

Uncle Jacob glared menacingly from a small wooden table he used for culling.

“If ya start gettin’ me some good catch from this bay, maybe the water’d settle

Clayton peered at a beaming Lester, who was maneuvering the scissor-like

wooden handles, and then gazed jovially at his uncle. “Gotcha, Captain,” he said

ordinary part of their day. Rarely did they take any of his nitpicking too seriously,

though. It tended to brighten the day; besides, he was paying them to work on his

boat—if one could refer to it as such. Being a small old wooden vessel, it sported

only two moderate sails. It was approximately twenty-five feet long and housed a

tiny six-foot-by-five-foot cabin. There was a rickety table in the open, which the

old man used for culling, and a number of oak barrels lining virtually each side

beyond the running boards used for storing oysters.

this part of the Chesapeake Bay. The small crew harbored from a town named

Reedville on the southern eastern shore of Virginia. Uncle Jacob owned a modest

one-room cottage near the shore that housed all three of them.

“Hey, Uncle J., you gettin’ rich off us fetchin’ these oysters for ya?” Clayton

wisecracked to his uncle while easing the nippers back and forth.

The crusty sea captain stared blankly at his nephew and then, yanking his

pipe from his mouth, blew a large puff of smoke. “I’ll be dang lucky if I don’t

go broke with the scrap you two keep bringin’ up,” he snarled before abruptly

returning to his task at hand.

Both Clayton and Lester chuckled uncontrollably at yet another snide remark

from the old geezer to liven up today’s routine.

The morning bore well into the afternoon, and the fishermen were close to

As perspiration saturated his clothes, Lester released one of the handles on

the lengthy tongs and began rubbing his left arm. It had started to burn from

manipulating these oversized contraptions throughout the day.

Siren and saint, hedonist and penitent, Mary of Egypt was a woman of extremes. A runaway at the age of twelve, she ventured to Alexandria to begin a life of reckless promiscuity. But a pilgrimage to Jerusalem brought about an inward change that drew the adult Mary into wilderness and solitude. From the monasteries of fifth-century Palestine to medieval Europe, the fame of this Desert Mother gradually spread—by both the written and the spoken word, and through visual art. Lions and Souls is a work of fiction based on ancient accounts of Mary’s life. Retold for twenty-first-century readers, an enigmatic figure from a remote past is revealed to be surprisingly familiar and relevant.

Author John Loranger’s previous work, The Odyssey of Art O’Hara, has been described as “harrowing, satisfying, haunting” (Kirkus Reviews). He was born in Butte, Montana, in 1961. He now resides in Nevada, where he continues to write fiction.