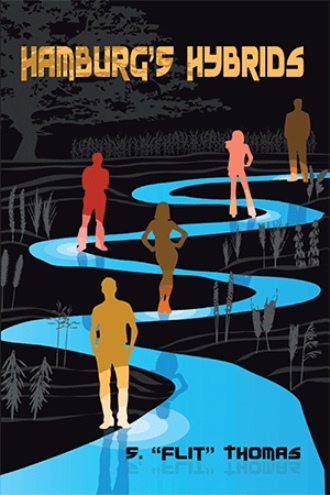 Jennifer placed her bookmarker on the page and sighed. She had read some unbelievable information. She was wondering if anyone else in South Carolina knew about this research and was a possible offspring of some of the inhabitants of this city. From the contents, she was puzzled as to why no one in the area complained or was aware of the human research he was doing. It was evident that he was not only well known, but had acquired wealth from his work and the products he had created and produced. She was aware that her grandmother had come from South Carolina, but from the city of Columbia. Was it a possibility that her ancestors were a part of the hybrid research. She would make a note to ask her Aunt Onnie, if her mother was born somewhere else and then moved to Columbia. As she stood up she saw Edwin and Rosa's two sons leaving the tennis court. She knew that she had to get her countenance together because Edwin could read her very thoughts. This was some heavy and unsettling reading she had done today. She would have to put this on the back burner since she needed to be refresh and perky for the dinner party on Thursday at Mr. Kahuna's home. Tonight they were having dinner with Rosa and her two sons. She wanted to discuss some of the contents with Rosa, but felt this might not be the right time or the setting to do so. To cleanse her soul, thought and mind of the information she had just ingested she needed to feed her totally demeanor with thoughts of her beautiful family and friends. She sighed, how would Edwin take it knowing that his estate chief of operations and his landscape employee were his aunt and first cousin. Wow! This was too heavy for her to think about. How she wished that William Sr. had discussed this information prior to his demise. Just because her profession dealt with the Civil rights of others, it did not mean she had the strength to open up the secrets and untold stories of the Langley's family. Jennifer picked up her inspirational reading, sat back down and began to sprinkle her thoughts with jovial, inspiring and heartfelt words on the pages of this book. She felt the reading of this book would put her into another place and a more soothing spirit.

The contents of this book will open up the full spectrum of the readers' interest in knowing who are the Langleys and what is the secret the patriarch of the family left in a package after his demise. This novel paints a captivating picture of the lifestyle and history of a well-established wealthy family in Charleston, South Carolina. The family has to face the fact that the patriarch of the family, upon his death, decided to reveal, via a handwritten document to his daughter-in-law, Jennifer, the true story of the maternal and paternal bloodline of his only son, Edwin. This document was delivered to Jennifer on the wedding day of his firstborn granddaughter, Bria. The story provides the dynamic characteristics, personalities, and secrets of each family member and culminates with the son, Edwin, wondering why his father waited until after his death to reveal these truths. Edwin is left wondering how these revelations would affect him in his business and social life. More importantly, will he be able to cope with the truth about his real bloodline?

S. "Flit" Thomas lives in McDonough, Georgia. Her love for writing prose, short stories, plays, and inspirational songs have brought her to this period in her life: the completion of her first novel, Hamburg's Hybrids. She has a BS in biology from Tuskegee University and a master’s from Wright State University. Her love for reading nonfiction, fiction, biographical, inspirational, and other written materials was her catalyst for forming three book club groups in California, Indiana, and Georgia. She retired as a senior manager from the US Department of Treasury.