Walk of the Claimed 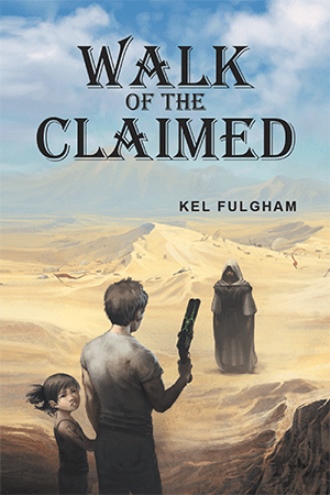 Thad's eyes darted to the destroyed glass near the window and tried to come up with a plan. She was shot on the right side of her body, right where he believed her appendix was. He didn't have any time to think; he had to move her quickly. He picked her up as gingerly as he could, and threw her over his shoulder in a fireman's carry. He had to run with her and he couldn't chance doing that with her in his arms. He checked the window again for any other surprises, and then he went through the cracked door. He started moving toward the parked rental car, and just as he tried the door, he remembered the keys were still inside the hotel room. He swung around to the passenger side and tried each door but they were locked. The sirens were getting louder so he knew he had to move. “HEY!!!” someone behind him shouted. He turned and at the same time gripped his gun. He identified the man quickly so he didn't fire. The man was part of the cleaning crew. He signaled to Thaddeus and then a red patch suddenly appeared just below his chest before the man dropped to the ground face forward. “Don't,” said the voice that was too close to him. He was behind him to the left, and he knew his options were few. Since he didn't know exactly where he was, he couldn't get a fix on his position. He did what he thought was best. The man behind him sounded cold and dispassionate, and Archer was sure it was the same man he saw giving change to Trinity just minutes before. He opened his hand and the gun spun upside down, and fell to the ground. “It doesn't have to end like this,” Archer said, “we can --” The man discharged the gun again, and the bullet sailed inches from his head. He was definitely using a silencer. “Gimme the girl,” the man said. “Do it now or I take her from you.” Sirens were getting closer. He estimated under sixty seconds. “She's hurt,” Archer explained. “I'm taking her to the hospital.” The man moved so that he was directly in front of Thaddeus. His face was different now; when he was giving the poisoned food to Trinity, he was just a nice guy doing his job. His face contorted and showed that the nice fellow had gone through a serious transformation recently. “I want you to see this,” the man said. His smile was back, but it wasn't one Archer wanted to see. The man used one hand and tugged at the body slung over Thaddeus until she fell off him. Her right side was drenched in blood, but she was half-conscious. The man held her up so that she was quasi-standing next to him. Her eyes opened, but Archer could tell she was in shock. She tried to wrestle out of his grip but it was barely causing him annoyance. He put the barrel of the gun up to Trinity's head. Sirens were about twenty seconds away. “Remember me,” the man sneered as he pulled the trigger. Thad watched helplessly as the gun discharged, and the bullet went clean through her head. Trinity's eyes closed for good, and the man held onto her limb body. Her life, as truly sad as it was, had come to a violent and needless end. With that, he flopped her limp body over his shoulders and made his way to the corner of the hotel Archer was staying in. The man turned and flashed a toothy grin before disappearing behind the hotel. Before he could even take a step forward, six police cruisers came barreling around the other corner of the hotel. Thad placed his hands behind his head. He knew the drill. Before Archer had a chance to explain what happened, a boy who appeared to be about fifteen came running over to the growing number of police. The officer commanded something to the boy and then a second officer came over. A third and a fourth joined them. Thad saw the boy hand a phone over to one of the officers. “I was trying to save her life,” Thad muttered to the officers detaining him at gunpoint. “Ren, come see this,” one of the officers beckoned. Uniformed police surrounded Thad and even as they were viewing the video on the kid's phone, more cars arrived. Thaddeus was quickly forced to his knees by one of the armed men and his hands were cuffed. The officer standing closest to Thad looked up and moved toward the kid and the growing gaggle of officers. After about ten minutes, Officer Ren came back over to Thad and sped through his Miranda Rights. “I'll tell you what I know so far,” he continued. “You brought this girl here. She got popped, and you're the one responsible. You tell me different.” Thaddeus heard the words, and he felt them ring true in his mind. He was responsible.

No matter what the package is or where it needs to go, Thaddeus Archer is the man who will get it there. That is, until his most recent mission. He comes home after losing his package, and his life begins to unravel before his eyes. Just when things begin to turn around, he finds himself faced with another impossible high value job—deliver a young girl (who doesn’t speak) to Japan in thirty days while avoiding her father, who has deadly plans for her. His wife is brutally murdered, his sons are missing, and the law is after him. Thaddeus has to figure out how to deliver this child to her destination without getting them both killed. Her mother is an angel, and her father is a demon. And she’s amazing.

Kel Fulgham was born and raised in New York, but even as a small boy, he loved to set pen to paper or whatever else he could write on. Raised as an only child, his only steady companions were the multitude of books he could get his hands on. Starting from authors like Richard Adams and Madeleine L’Engle and moving towards James Blish, Carl Sagan, and Stephen King, his voracious appetite for the written word could not be satiated. He would devour hundreds of books in his 20s, and then he picked up writing in his 30s. Kel Fulgham has written poetry that has touched the heart, songs that have both angered and soothed the soul, and books that have scared the crap out of many. Now residing in Maine, he has found a peaceful venue to write and has done so.