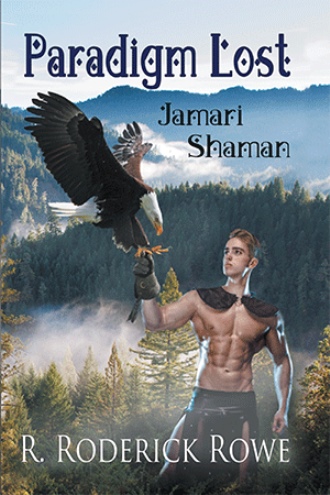 He had a few free hours between the militia lessons and his scheduled afternoon time with Shane. Setting aside his worries about Christian (someone else’s concern now, right?), he packed some sausage, cheese, and a small loaf of bread into a leather carry-pouch, grabbed his bow, and then set off up the mountain.

The trails were more slippery with the advent of the rainy season, with the forest still shedding large drops from moisture-laden limbs in sudden splots and splashes below. He was wearing full leathers against the chill of the day, including a fitted lamb’s-wool cap over his head to preserve body heat. The occasional drop of water was largely unnoticed as it ran down the outer layers. Except, of course, that one pernicious drop that landed on the back of his neck and slid down to send a shivery chill along his spine.

The summer-grade moccasins had been upgraded to a set of knee-high leather ones that had a reinforced sole to aid in traction, and the thickness of the leather jerkin was almost twice as thick as his summer-weight one, adding noticeable weight to his climb. He was sweating as he topped the first set of hilly rises above the dam, where he paused to look down on the village below through the winter-bare limbs of a stand of oaks. Along with the leaves, he also missed the insulted and raucous cry of the bluejays as they danced along above anyone who would dare to intrude in their territory. They seemed to have vanished with the last days of fall. Gone too were the robins with their gentler calls. Even the crows were absent today. The winter woods were a quieter place. With his breath restored, he turned and headed up again. In just over a half hour, he reached his tiny little ridge-top meadow.

He paused there, wondering how he was going to settle himself in for his meditations on the water-soaked ground. He turned around a couple times, looking for a suitable place. With the bare branches of the oaks and the occasional maple offering scant shelter to form a dry spot, he simply emptied his leather carry pouch of the lunch items and settled the pouch onto the ground in a tuft of brown grass stems. He sat his bow beside the seat and settled himself for meditation.

As he was bringing himself to focus, he watched a hawk circle into view from above the rise to his south. Seeming to catch the piercing gaze of that hovering hunter, he imagined what those keen eyes might be finding in the wintry day. A mouse maybe. Or a chipmunk. If it’s lucky, maybe a small rabbit. Jamari’s eyes lost their focus on the real world as he entered into this imagining.

He is floating in a careful circle when he sees a twitch of grass below. He immediately enters into a hover, with wings shifting to a fast flutter to hold him in place, using his tail feathers to balance himself on the cushion of air. Another twitch in the grass. It’s a squirrel, drawn out into the meadow to dig up a cached nut. Seeing an opening, he shifts his wings into dive mode, making his whole body into a sharp arrow, diving down unseen, unheard, until his shadow crosses over the prey. It’s too late, though. He’s opening his wings, turning up his body, and swinging his clawed feet down to snag the furry body in a spine-snapping jerk, then using the remaining momentum of his dive to pull the lifeless body aloft.

Hunger. Hunger that should be satiated. Driving him on, turning him toward the largest prey he’s ever taken on. But the hunger!

Jamari jolted out of the trance in sudden knowing and leapt to his feet, grabbing the bow and turning around as he pulled an arrow into draw. He wasn’t even fully drawn, or truly aimed, when he realized that the arrow must go now! He released and watched the arrow slip into the breast of the springing cougar.

Too late! The cat’s momentum was going to carry it into him anyway! Jamari flung up his left arm, still holding the bow for some level of shielding and reached for his knife with his right hand. The weight of the cougar carried him over backward as he saw the jaws clamp onto the wood of his bow, saw and felt the wood crush under the pressure, then felt claws penetrating his heavy leather sleeve and an intense pummeling at his abdomen as the hind legs dug in. He got the knife in hand and plunged it into the side of the maddened animal just behind the shoulder.

When the cougar turned a snarling set of fangs to Jamari’s head and neck, he was very convinced that it was all over for him. He kept pushing away with his injured left arm as he twisted the wrist of his knife hand to force the blade up toward the spine from the inside in a final attempt. Relief as the cat slumps and the sliding blade reached something vital. It’s snarl of rage turned to a gasp as it collapsed down onto Jamari, with only enough energy remaining for a feeble clawing attempt that didn’t even penetrate the leather.

Shocked, Jamari pushed the body aside, leaping to his feet to run. He saw the lifeless eyes, though, and held fast, shaking: all-over shaking, tremors so strong he lost his grip on the knife he hadn’t even noticed that he still held. When he reached down for the knife, he felt a stabbing pain as the leather of his left sleeve shifted over the open wound in his forearm. Gasping, he looked down to see blood dripping from the hole in his sleeve and felt a crawling sensation as a red rivulet dripped from his wrist.

Sitting back down onto the somehow-undisturbed leather pouch, he held his left arm in his right hand for a moment, before remembering that he should get to the wound and stop the bleeding. He found it awkward, trying to remove his shirt with only one arm as he favored the injured one. He suffered a couple of bumps that made him feel as though his skin was being freshly violated each time. He persevered, though; and once he got the jerkin off, he realized that two claws had penetrated to give him a double cut. Deep enough that it would certainly need stitches, but not life-threatening. He used his knife to cut the damaged part of the sleeve from his jerkin, which he then cut into strips, and used a wad of sanitary cloth from the pouch to form a bandage.

Once he had the arm bandaged, using his teeth to hold the leather strip on one end while he tied the knots, he knelt down beside the cougar, laying his good right hand on her head. “I thank you for giving yourself so that my tribe will not go hungry. You honor me with your gift.” He offered the Hunter’s Thanks, hoping that it was appropriate in this circumstance. He hadn’t actually set out to hunt a cougar, after all, and, Do you thank the one who was hunting you?

Paradigm Lost: Jamari Shaman is an adventure in future, post-apocalyptic Oregon. Jamari enters into the challenges and training regimen that will teach him to be a fully functional adult member of his tribal community. He learns how his village supports itself in a non-industrial society after the fall of civilization eighty years before. He takes a journey through the Oregon lands to the coastal areas to render and gather salt for his tribe. Along the way, he learns of the boundaries and expansion of tribal lands and also encounters other peoples who live outside the tribal influence, sometimes with disastrous interactions. Along the physical journey, he is also taking a personal journey into his own spirit and soul, surprising himself and others with unsuspected talents and skills that exceed expectations. When he emerges from this physical and spiritual journey, he will become Jamari Shaman, a respected spiritual leader of his tribe.

About the Author R. Roderick Rowe studied writing in college for several years, working as assistant editor, then editor for his college’s literary magazine. He also spent a term as copy editor for his campus newspaper. He is a gay man and uses this “affliction” to build characters and situations in his fictional work. Throughout his career in writing, Rowe has published a number of short stories and poems, as well as a technical manual for power plant employees. Paradigm Lost, penned under a pseudonym, is far different in genre and style than anything he has written before.