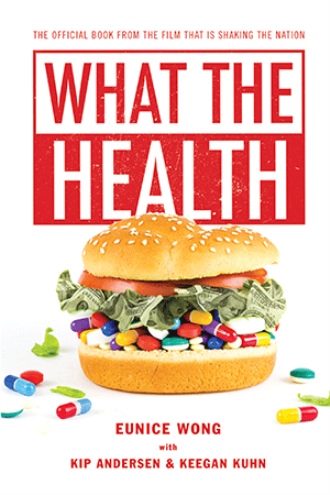 What The Health is the official, stand-alone companion book to the groundbreaking documentary of the same name, directed by Kip Andersen and Keegan Kuhn, directors of the award-winning documentary, Cowspiracy: The Sustainability Secret. If the film is a peephole, then this book knocks down the entire door, diving into expanded interviews, extensive research, and personal narratives.

Think about that. If, at a neighborhood cookout, the dad next door offered you—and your child—a cigarette and a light, how would you react? And yet we accept, with thanks, the glistening beef burgers from that same dad.

What’s the difference between taking the cigarette and the burger? The smell and the taste. The social assumptions. The habits. The lack of knowledge.

Journey with Kip and Keegan as they crisscross the country, talking to physicians, dietitians, cardiologists, pediatricians, bariatric surgeons, lawyers, economists, activists, and food safety advocates in a passionate search for the truth about the food we eat, and the stunning implications for our health and the country’s cascade of killer diseases.

Along the way they meet René Miller, whose home is routinely drenched by “manure cannons” from the factory farm next door; slaughterhouse vet Dr. Lester Friedlander who blew the whistle on Mad Cow Disease; political prisoner Jake Conroy; and world-class athletes like former NFL-defensive lineman David Carter and ultra-endurance athlete Rich Roll, who completed 5 Ironman triathlons in under a week, and many other fascinating characters, each with their own piece of the puzzle.

There is a health revolution brewing. Many people know there’s something terribly broken about the industrial food, medical, and pharmaceutical systems, but they don’t know what it is. It’s no wonder, because there is an intricate political and corporate apparatus in place to keep them from finding out.

People think heart disease, cancer, and diabetes are inherited, not realizing that what they’ve actually inherited are the eating habits of their parents and grandparents. Lifestyle choices like diet and (lack of) exercise are responsible for about 70 percent of deaths in this country. Diseases that kill millions can be prevented, or even reversed.

What The Health takes you on an adventure, uncovering the lethal entwining of the food, medical, and pharmaceutical industries with our own government, and the corporate, legislative web designed to confuse the public and keep Americans chronically—and profitably—ill.

EUNICE WONG is a multiple-award-winning actor, writer, and editor who wrote The Sustainability Secret in collaboration with Kip Andersen and Keegan Kuhn. She trained at the Juilliard School and has performed extensively on professional stages nationwide. She is Chief Editor of Truthdig’s Book Review and its Countering Violence Against Women series.

KIP ANDERSEN is the founder of AUM Films and Media, a non-profit dedicated to promoting thrivability, compassion, and harmony for all life. He is co-director with Keegan Kuhn of the groundbreaking documentary films, Cowspiracy: The Sustainability Secret and What the Health, as well as an entrepreneur.

KEEGAN KUHN is an award-winning documentary filmmaker, video producer, and professional musician. He runs First Spark Media, a video production company working with conscientious organizations. He directed Turlock: The Documentary and Something To Be Thankful For, and co-directed, with Kip Andersen, Cowspiracy: The Sustainability Secret and What the Health.