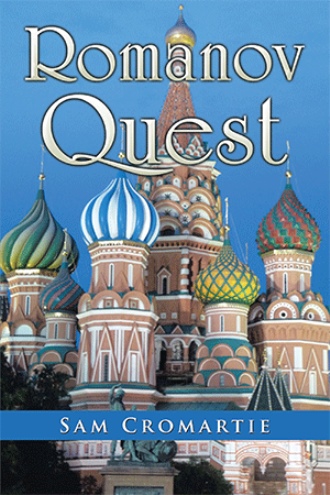 CHAPTER 1: MOSCOW (September 2, 1939) Yuri stared into darkness and marveled that he was alive. Lifting his head brought on a wave of dizziness. He surrendered to it, collapsing back onto the bed. When he reopened his eyes, the only light came from a dim kerosene lantern on the dresser. His gaze turned to the woman sleeping beside him. Her flannel gown failed to conceal her tall, slim figure. He wanted just to lie there watching her breathe. Nothing seemed important except being near to her—not even the dead NKVD agent in the woods behind the cottage. He moved a lock of blonde hair from her face but recoiled when he saw the blood on his fingers. He sat upright and fought the dizziness that swept over him. We should not be here. Tania sprang awake, placed her hand on his chest, and guided him back to his pillow. “Lie still, Yuri. The bleeding will start again.” He stared at the blood-soaked dressing on his arm. Clots covered its surface, but they were dry. He threw his legs over the side of the bed. “We can’t stay here.” Tania frowned. “I know, but you’re too weak. I could barely get you to bed.” He recalled the flowers he had brought and the wine, dinner, and sex that had preceded the arrival of the secret police agent who had staked a claim on her. “All you had to do was ask.” She blushed. “I meant after the unpleasantness.” Yuri thought that was an odd description of the way Valdislav interrupted their love making, slashed his arm with a knife, and tried to kill them. The bastard would have succeeded if Tania had not struck him with a stool and given Yuri the opening to stab a knife into his heart. Yuri had no regrets for killing the man. It was something he had planned for a long time. Valdislav had sent him with his stepparents to the gulag. They died there. His goal in life had become revenge until he met Tania. Now he just wanted to be with her. Last night had been a turning point. She had at last admitted her feeling for him, and he had realized he did not want to live without her. Valdislav would not bother Tania again, but their lives would never be the same. “I left his body in the woods. I should have buried it.” “You lost a lot of blood. I was afraid you would die.” “I’m fine now.” He stood and walked into the kitchen. The dizziness returned. He slumped onto a straight chair at the table. Tania removed the dressing from his arm. The gash from Valdislav’s knife was deep, but the bleeding had stopped. He touched the bruise on her face and thought of what had almost happened. She turned away. “It’s nothing.” She peeled off his torn, bloodstained shirt. “You still have glass in your back.” “I know. It hurts like hell.” He had fallen onto a broken wine bottle during the fight. Now with every movement, he could feel the shards shift under his skin. “Hold still.” She picked the pieces of glass from his wounds and washed the cuts with soap and water. Yuri gritted his teeth and tried not to move. This was not the way he had planned to spend his first morning with Tania. He had hoped for a day for earning her trust and for telling her how he felt. She tossed his shirt to him. “We have to dispose of the body.” “I know.” Until yesterday, Valdislav had been her friend. She had been his personal pilot and had lived in his house, helping him recover from a bullet wound. She had left when he demanded more than friendship and she realized that she wanted to be with Yuri. His henchmen would come looking for her as soon as he failed to report for work. As Yuri fumbled with the buttons on his shirt, Tania turned her back to him and removed her robe. Seeming oblivious to his presence, she dressed quickly, never once glancing toward him. He, on the other hand, tried to look away but failed. Her smooth skin and sleek body made him forget his pain. He wanted to hold her again and to relive the part of the last evening before the “unpleasantness.” Tania walked outside without saying another word. Yuri retrieved his flight jacket and followed. “Do you have a shovel?” She kept walking. “We don’t need one.” “Why not?” She stopped beside the stiffening body. “We can’t bury him here. His friends know about me.” He stared at his dead enemy and thought he should experience some sense of triumph. Instead, he felt nothing except relief that the body on the ground was not his own, or worse, Tania’s. “What do you want me to do?” Tania bent over the body and gripped its ankles. “Take his shoulders. We need to hurry.” Yuri lifted the corpse. “Where are we going?” Tania stepped backward, straining to hold her half of the weight. “To Valdislav’s car. I need to drive him to the airport.” “Why?” She kept walking. “This is my day to fly the cargo plane. Valdislav is going to take his last flight.”

Valentina Kovalova, a cousin to Tsar Nicholas, fled Russia in 1917 after Bolsheviks slaughtered her family. She took her infant son to Germany but left his twin brother whom she thought was dead. She married a man who became a close confidant and friend of Hitler. As WWII commences, her husband commands a U-boat, and her sons fight on opposite sides. She moves in the inner circle of Nazi society while hiding Jews and occasional Allied soldiers in her home until Himmler discovers her involvement in the resistance.

Sam Cromartie M.D. is a graduate of the University of North Carolina and a veteran of the Vietnam War. He served as a thoracic and cardiovascular surgeon on the faculty at Indiana University School of Medicine and as Chief of Thoracic and Cardiovascular Surgery at Halifax Medical Center in Daytona Beach, Florida. He has published numerous articles in medical journals and is co-author with Richard Duma M.D. of High-Tech Terror: Recognition, Management, and Prevention of Biological, Chemical, and Nuclear Injuries Secondary to acts of Terrorism (Charles C Thomas, Publisher). He lives on an island off the coast of Florida. For detailed information, check his webpage, www.samcromartie.com.