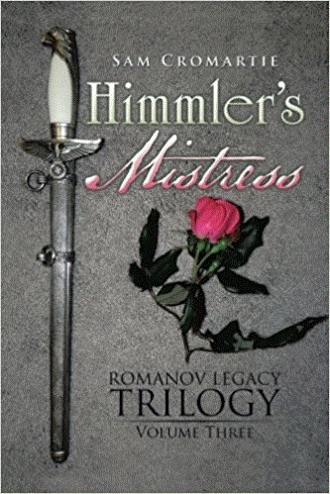 Valentina drifted in and out of sleep. She could hear voices—familiar voices, but concentrating on the words took too much strength. The beatings—the lack of food—the months of hard labor in Ravensbrueck Concentration Camp had drained the energy from her body.

She could not understand how she was alive. Himmler had ordered her death. Her thoughts meandered in a fog. The room bounced and tilted to the left. Her eyes flew open. They focused on her surroundings. She was no longer in the death camp. She lay in an airplane with her head in someone’s lap.

She lifted her gaze and stared at the man’s face. It seemed impossible. Ivan was in Moscow. He would never leave Mother Russia, and Stalin would kill him if he tried. Did he really come for me?

Rain and wind pummeled the plane. It bounced on the currents of air. Ivan wrapped his arms around Valentina as if his body could protect her from any danger.

She wondered what her life would have been like if he had come with her to Germany twenty-eight years ago. She had fled Russia after Bolsheviks slaughtered her family. Ivan had been her lover and the father of her twin sons, but he was a Bolshevik and he stayed to lead the revolution.

Her boys were men now. They had come with Ivan to rescue her, and seeing them together filled her with pride and relief that they were alive.

She could feel the plane descending. Her ears popped. She wanted to know where it was landing. Nowhere was safe. She had betrayed the Reich. The SS would kill her no matter where she went, and she hated to think what they would do to Ivan and her sons.

The stolen German Siebel Si 204 transport plane bounced onto the runway of the American base in the western portion of Germany occupied by the Allies. Ivan watched through the window as jeeps sped toward the aircraft and soldiers aimed their rifles. We’re going to die, he thought. We should never have entered American air space. It’s all my fault.

The pilot yelled something to him. The wind whistling through the bullet holes in the fuselage drowned his voice.

Ivan prayed that the troops would ignore the swastika on the side of the plane and would not open fire with their automatic weapons. His family was together for the first time. They could be wiped out in seconds.

Valentina had drifted back to sleep. He could not believe how thin and weak she was. He stared at her face. She’s still beautiful. After all this time, she takes my breath away. I was a fool to stay in Russia. I should have come with her.

The plane rolled to a stop. The pilot opened the door and stepped to the ground. He was a tall man dressed in a shabby American Air Force uniform. He ignored the soldiers who pointed rifles at him and spoke with a Texas accent to the major who appeared to be in charge. “I’m Lieutenant Colonel John Sloan. I have a critically ill passenger.”

The major ignored his salute. “What are you doing flying a German plane? We could have—should have shot you down.”

“The Germans destroyed my bomber over Poland. I spent some time in a POW camp. We escaped and hooked up with partisans. Been fighting the Germans.”

“The men in the Siebel helped me escape. We captured the plane and flew it to Ravensbrueck to rescue our passenger.”

“That’s impossible. You can’t expect me to believe that nonsense.”

Ivan left his Luger pistol on the floor. He lifted Valentina and stepped out of the plane. The guards swung their M1 carbines toward him. The major yelled, “Stay where you are.”

Ivan continued down the steps. He thrust Valentina into the man’s arms. “This woman needs help. She’s going to die if you don’t get her to a hospital.”

The officer glared at Ivan but handed Valentina to the private who stood beside him. “Take her to the infirmary.”

“Yes sir.” The private carried her to an ambulance that had parked behind the jeeps.

Ivan pivoted to follow, but the major stopped him, “I didn’t say you could leave.”

Ivan looked back at the ambulance. “I need to go with her.”

“You aren’t going anywhere until I know what’s going on here. Who are you, and what were you doing in an enemy airplane?”

Heinrich Himmler sent Valentina Schneider to a concentration camp for helping Jews and Allied soldiers to escape from Germany during WWII. Her sons and their father, Ivan, rescued her in the last month of the war. In this final book of the Romanov Legacy trilogy, Valentina returns to her home in Munich. Her sons go to Soviet territory to find their girlfriends, but the Soviets arrest both men. Ivan goes back to Moscow to free them. Valentina had attended many parties with Hitler’s leadership, and rumors abounded that she had been Himmler’s mistress. She owned a lens factory near Munich. Nazi administrators brought slave labor to the factory while she was in the death camp. Allied prosecutors believe she was responsible and charge her with war crimes. They incarcerate her with Goering and the Nazi leadership who await trial at Nuremberg.

Sam Cromartie MD is a graduate of the University of North Carolina and a veteran of the Vietnam War. He served as a thoracic and cardiovascular surgeon on the faculty at Indiana University School of Medicine and as chief of thoracic and cardiovascular surgery at Halifax Medical Center in Daytona Beach, Florida. He has published numerous articles in medical journals and is co-author with Richard Duma MD. of High-Tech Terror: Recognition, Management, and Prevention of Biological, Chemical, and Nuclear Injuries Secondary to Acts of Terrorism (Charles C Thomas, Publisher). He lives on an island off the coast of Florida. For detailed information, check his webpage at www.samcromartie.com.