A Diary Written to God Accusing Against All of the World 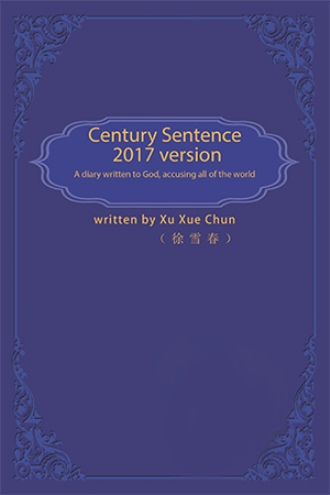 316. The president of Syria favours the ‘Muslim ban’, because their country has been deeply afflicted 11 February 2017 Recently, many countries have showed their opposition to the ‘Muslim ban’. Most stringently, the ‘Muslim ban’ has stipulated that Syrian citizens are permanently banned from entering the United States. However, the president of Syria didn’t oppose this ban but conveyed his understanding and support in public. Why? Because Syria has been deeply afflicted. Syria is a typical case. The president of Syria has always said that the war of Syria has nothing to do with the country at all but is purely a war from the outside. The core members and diehards who fight in Syria are not Syrians at all, but terrorists from other countries, including Saudi Arabia, the state of Qatar, and Turkey. Of course, there are also supporting countries such as Hezbollah, Iran, and Russia. The war wouldn’t break out in Syria at all if its government was capable of banning the terrorists they didn’t welcome from entering their country. Today, Syria is in ruins, totally because its government was incapable of rejecting those evil persons’ entry to their country and taking control of their borders. In other words, the present situation of Syria is a result of globalisation. It will be the same as today’s Syria if a country fails to take control of its borders, reject admittance of evil persons to it, or ban people from countries of origin of terrorism. I have discovered that the president of Iraq has also conveyed his dissatisfaction with the ‘Muslim ban’, because Iraq is also included in this ban. All other countries have reasons to express their discontent with the ‘Muslim ban’ except for Iraq, as Iraq is essentially the country of origin for IS. After the overturn of Saddam’s regime, former Iraqi soldiers mostly joined IS. This was also the fundamental reason why the Islamic State was so powerful in the war. They were the most powerful regular Iraqi army in the Middle East rather than guerrilla forces on gullies or young soldiers. Recently, tens of thousands of terrorists were transferred from the battlefield in Mosul of Iraq to the Syrian battlefield after Mosul was encircled. As a result, great harm and threat was posed to Syrian soldiers and people. This was like a part of former American government’s work. It is Iraq that has contributed to terrorists’ acts of terrorism. Meanwhile, Iraq is still constantly doing harm to other countries and inflicting them with terrorism. You are impenitent. You neither apologise to the world nor to Syria but still file an objection against the ‘Muslim ban’. Men can’t be so impudent like you. The fact that Trump is opposed to Islam and Mexican drug dealers doesn’t mean he’s a racist. Recently, some bosses of American technological companies have been saying that Trump is a racist. I think it’s ridiculous.

This book uses humorous, witty, sharp, exaggerated, and miraculous writing style, which is so interesting and makes people belly laugh. Someone even laughed to tears. As an ironic book with strong logic and knowledge, this book enables readers to experience the happy life value and brings you endless wealth. Don’t you believe that it can bring you wealth? Now Chinese tourists are the most popular around the world because of their strong purchasing power. Why is Chinese purchasing power so strong? Do you want to be as rich as Chinese? Just read this book, and you will find the secret and be enlightened. As I can ensure social stability, economic development, well-off family, good social order, and absence of terrorist attack in China, I will make your countries see the same effect. Just follow my advice. You might think that I am arrogant. Actually you are wrong; I am qualified to say so. I am the most influential civic opinion leader and strategic scholar in China. I tried to put my judgments online, but only those who were more brilliant than geniuses agreed with me and took my advice. However, it really disappointed me that what the ordinary people accepted when they were confronted with truth and reality was authority; obviously, they gave up the former. The only thing I can do is tell you what I have done and what contributions I have accomplished as well as how I verify my accomplishments, to make you trust me as a successful person, to believe in me and listen to me cautiously. This book collected my comments and suggestions on all-important events which occurred in China and around the world from 2004 until now, which are also my appeals to God against the injustice and unfairness of the world. Every article in the table of contents has its writing time marked so that you can verify my influence on the political situation of China and the world, according to the writing time of each article, my opinions, my suggestions, and dramatic change of the world political situation. You can also verify how God has responded to my appeals and requests, according to the writing time of each article, my opinions, my suggestions, and dramatic change of the world political situation.

I am Xu Xue Chun, a leader and scholar of Chinese civil opinion. In April 2004, when China’s new prime minister and chairman just took office, soon I saw Chinese news about the event of the Tieben Steel Company. I was suddenly inspired by God that I needed to accuse the wrongness, absurdity, and injustice of this world. Then, I wrote five articles on the reform of state-owned enterprises and reported and gave publicity to the situations to the Chinese government at all levels for many times through network and mails, which are called petitions in China. Accidentally, they were accepted and emphasised by Chinese government. At the stage when China’s state-owned capital was about to collapse, the direction of state-owned enterprise reform was completely reversed, and they became the basic policy of state-owned enterprises and have been used until today. From this matter later, I feel that I am a responsible person, although I’m just an ordinary netizen. I have been making comments and exchanging about hot events happening in China, on the network as an ordinary netizen. My suggestions were basically adopted and emphasised by the government. It can be said that I played a key role in the success of China’s economic reform. Since then, China has gradually escaped from the dispute and turmoil, unified thinking, embarked on success, and now China’s society is stable, economy is developed, people become rich, and social order is good. I think I can give the Chinese government some suggestions to make China successful. I can also give other countries some suggestions to allow them to change and succeed. I set up a website in 2013 to put the translated articles of mine on it and promote the Chinese model to other countries in the world. From the news at that time, other countries were in exchange with China and learning the Chinese model. In August 2014, when I saw the atrocities of the Islamic State from the news, I was furious and decided to accuse the world to God. I developed my own website and my suggestions were demonstrated in my diary for God, to complain about this world to God. So God will reply to me, and he will have an impact on the world political situation. Reasonably, they will listen to me carefully and take my advice. The success of Chinese reform, the election of US president Donald Trump, the reversion of the Middle East war situation, support of the Syrian government forces, the Taiwan issue, the Hong Kong issue, the defeat of the Islamic State, the objection to Islam—all of these can be seen in my diary to complain to God. Finally, all of these have come into reality, which I think are the replies from God and his determination. You all can verify what I said according to my diary dates and the violent change of world political situation. The reason why I have an impact on the world political situation is not that I have something special, but the truth I revealed, just like a small boy who says the emperor is not wearing anything in the fairy tale ‘The Emperor’s New Clothes’. What persuaded and changed them are reality, truth, and justice. What I have done is tell the reality, truth, and justice. The only things I have in mind are true things and putting forward my solution as a reference. People who choose the truth, justice, and reality, categorise themselves progressively to God.