A Wind of Change 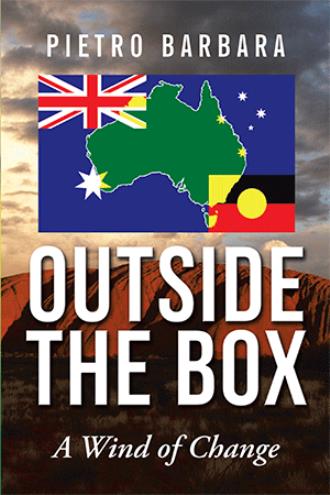 Buckle up! This is a refreshing, exciting, challenging, fun ride. Under the licence of outside-the-box thinking, the writer has actually given believable practical alternative answers to most of Australia’s current challenges. The overriding intention is to promote outside-the-box thinking, so provoking discussion and debate—indeed any reaction that might facilitate our journey to the ‘next level.’ • Beginning with the creation of a respectful republic; a new flag; a sensitive, inclusive constitution; and a renewed political system. • Addressing the taxation dilemma and offering universal fair retirement and healthcare. • Solving the energy, water, and climate change challenges and making a proud place for our First Nation people. • Advocating an Australia coming of age on the world stage, putting Australia first in the eyes of all. • Then on to touching other emerging issues that will be fundamental to shaping reform in Australia. Is this work a brave and wonderful revelation or just a dream? Only time will tell. A must-read, this book will stimulate, aggravate, and initiate outside-the-box thinking and encourages participation through the interactive website, where the reader may contribute and be valued. Chapter 1: LEVEL FIELD PLAYING Wages, jobs, and living standards have been in rapid decline for at least the last thirty-five years . . . It’s time to wake up . . . We need to jump out of this ridiculous box we are currently constrained by . . . What if the tax was split, with a small portion paid on gross income and a portion paid on net income . . . This way, the country collects tax first as well as last. Chapter 2: ENERGY Would a solution that eradicates carbon emissions, compliments renewables, and provides cheap or even free power for Australians and Australian industry in an environmentally friendly, sustainable proven way be of interest? Chapter 3: RENEWING AUSTRALIAN POLITICS The idea of a republic has been floated before . . . Further, I think it deeply dishonours [the Queen] and causes insult to say we will wait till she is dead. Far better to proudly come of age . . . The Westminster system of government and our political system is also due for an upgrade. Chapter 4: CLIMATE GHANGE Humanity has not yet fully evolved into intelligent, sentient beings who control, respect, and value their planet. Chapter 5: INDIGENOUS ISSUES The way Australians think of the indigenous folk and the way society and governments consider their needs is, in my view, fundamentally wrong. Chapter 6: AUSTRALIA DAY AND INDEPENDENCE DAY Such a day has not yet come, but it might not be far away. My outside-the-box thought in this regard is ‘Independence Day’ as a day to mark Australia coming of age as a republic. Starting anew with a new constitution—one that truly recognizes Australia’s First Nation people as well as all other Australians. Chapter 7: SUPERANNUATION AND RETIREMENT In my view, anyone who has worked and paid tax should be entitled to a retirement income, with the minimum an adequate pension. Chapter 8: HEALTH INSURANCE A public health service funded by a percentage of income. This could work a lot better than the current system. Private health insurance, is becoming more expensive. Chapter 9: EMPLOYMENT ETHICS Now that unions have less involvement and jobs are scarcer, individuals are unlikely to even say ‘Boo!’ when they are treated unfairly or even illegally. Chapter 10: BUYING A HOME I do, however, have big problems with international non-citizens competing with my kids for a home. Chapter 11: EDUCATION Without diminishing the importance of the basic—reading, writing, arithmetic, and the sciences—a lot more is needed. Chapter 12: RESPECTING SEXUAL PREFERENCES I see everyone embracing the acceptance of the concept as they should, but I do ponder a little on deeper thoughts. Chapter 13: GENDER ISSUES My outside-the-box concept on this one is an attempt to be sensible, unbiased, honest, kind and gracious but brave enough to state the facts. Chapter 14: MALE ‘ME TOO’ I am totally supportive of this movement which is directed primarily at respecting a woman’s right to be respected. Chapter 15: THE CHURCH I have an outside-the-box thought I would like to throw into the mix based on a personal life experience. Chapter 16: ISLAM TODAY Recently we had a national census where we had to tick the boxes. An outside-the-box thought here is that for Islam, there was only one box to tick. It said Muslim. Chapter 17: TAKING LIFE What about when there is a choice? Capital punishment, termination of pregnancy, and euthanasia are the big ones in this arena. Chapter 18: CRYPTO Many people still have a poor understanding of what crypto is. If you believe the future is digital, computer- , and Internet-based, then it is time to for you to consider learning about crypto. Chapter 19: RELIGION We cannot just accept all comers without scrutiny. CHAPTER 20: DEFINING AUSTRALIAN This is so important and so neglected. It’s great to change nothing, to say nothing, not upset the apple cart and go with the flow into the placid waters of mediocrity where stagnant waters soothe all. Or do we get out of the box, get on with it, and try to get it right. …………………………………………………………………………… This work is a philosophical opinion piece. • There is no such thing as a wrong opinion. • There is only my opinion and your opinion. • It is hoped that this stimulates you to have an opinion. • The outside-the-box banner gives licence to free and creative thinking. • It creates a safe arena to air and share your thoughts. • Some will get it wrong, and some won’t. • It’s the process we must embrace and encourage. • Opposing, knocking, and discouraging is common. • If you disagree, be prepared to say why and come up with something better. • My favourite saying used to be, ‘It is better to remain silent and be thought a fool than to open your mouth and remove all doubt.’ • Now I prefer, ‘It is better to be heard and to share in the hope that if I got it wrong, you might get it right, than it is to remain silent and blame everyone else.’ Other outside-the-box subjects mentioned include: prostitution, refugees, water, and the NBN. See our website for more.

Buckle up! This is a refreshing, exciting, challenging, fun ride.

Under the license of outside-the-box thinking, the writer has given believable practical alternative answers to most of Australia’s current challenges.

The overriding intention is to promote outside-the-box thinking, so provoking discussion and debate—indeed, any reaction that might facilitate our journey to the next level.

• Beginning with the creation of a respectful republic; a new flag; a sensitive, inclusive constitution; and a renewed political system. • Addressing the taxation dilemma and offering universal fair retirement and healthcare. • Solving the energy, water, and climate change challenges and making a proud place for our First Nation people. • Advocating an Australia coming of age on the world stage, putting Australia first in the eyes of all. • Then encouraging universal outside the box thinking by touching on other fundamental often contentious issues.

No subject is Taboo Outside-the-Box.