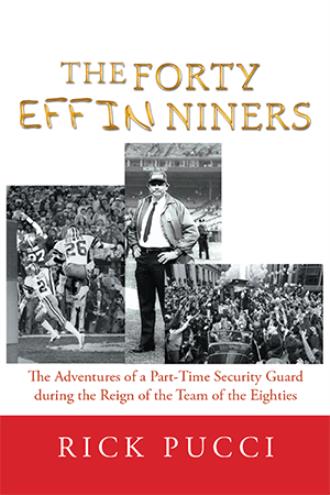 The thirtieth anniversary of Montana’s Super Bowl drive and Bill Walsh’s retirement (1989) is upon us. Author Rick Pucci’s a regular guy thrust into the midst of a dynasty in the making: the San Francisco 49ers of Joe Montana, Jerry Rice, and Bill Walsh. Pucci’s memoir is a blend of sports, culture, romance gone bad, and nineteen-eighties Americana from a fresh insider perspective.

Culled from copious notes at that time, this natural is for sports and non-sports fans alike.

In the eighties, these hapless Niners pull SF’s spirits from the morass of the Jonestown massacre and the murders of Mayor George Moscone and Harvey Milk. They also cured the author’s, broken heart.

My name is Rick Pucci, Sr. I grew up in a middle-class home in northeast Pennsylvania in small-town Glen Lyon/Nanticoke. Our family included five children, two parents, my Godmother, a dog and various inhabitants of our back-yard including a full-blown chicken coop. None of this was uncommon among the Italian-American families in the area. Baby boomer kids like me poured into the streets for games and sports, but our town was reliant on coal and soon suffered greatly on the socio-economic spectrum. Jobs became scarce.

I caught a lucky break. A local star football coach named Al Cihocki got me a chance for a full football scholarship, and amazingly I passed the try-outs. I thought I would become the next great linebacker at football power Penn State. Such a laughable plan in hindsight, considering I stood only six feet tall, weighed 185 pounds, and lacked speed.

A sophomore year injury saved me from four years on the bench, a proverbial blessing in disguise that released me to the wondrous Penn State way-of-life. I met a young lady on campus, and after graduating, we relocated to the sunny climes of the San Francisco Bay Area where I continued my education at the affordable San Jose State University graduate program.

Then she dumped me. I needed something to keep my mind off a broken heart, especially on Sundays, so I took a part-time security job for 7 bucks-an-hour at perhaps the worst franchise in all of sports at that time, The Forty Effin Niners.

Landing that job was miracle enough, but then the Niners proceeded to win 7 divisional crowns and 4 Super Bowls during my 8 seasons with the organization. Throughout this period I took copious notes and up-close photographs. At both my universities, my favorite courses, English writing and Composition came in mighty handy.

As President and founder of my own company, Park Ridge Financial, Inc., I write all the time, believing in the adage coined by Edward Bulwer-Lytton that "The Pen is Mightier than the sword." I also attended writing workshops at Evanston Writers Workshop (EWW), Jerry Cleaver's Immediate Fiction classes, and currently Story Studio in Chicago.

On a personal note, the greatest book I've ever read, bar none, is Irving Stone's The Agony and The Ecstacy. It changed my life. It's a bio on one of my heroes, Michelangelo Buonarroti, who wrote, "Man Gains his greatest strengths through periods of adversity." All his greatest works such as The Pietà, The David, and The Sistine Chapel came during stressful times.

Having established a successful business (where I no longer have to put in those incalculable hours), and after putting two kids Ricky and Scarlett through Master's Degree Programs, I finally found the time to write. Then, in 2018, I lost my beloved wife Maureen of 33 years, whom I adored, to a rare cancer. So I am practicing what Michelangelo preached, pouring my energy and grief into writing. I hope you enjoy my crazy accidental memoir from the Niners days. I will be taking 15% of my net royalties and making a donation to biliary cancer research. Meanwhile, my new novel, Peaceful Violence, is already "in the can." Look for it soon.