Did Extraterrestrials Bring Us to Intelligence on Our Planet? A Scientist Speculates on the Sparse Information Available from Prehistory 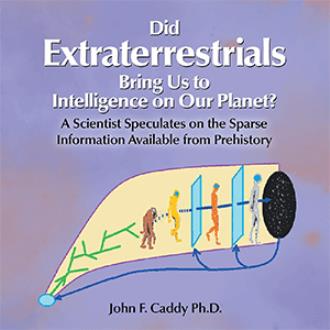 This book results from my literature search as an interested ecologist into the origin of intelligent life on our planet. I conclude that the evolution of life here was speeded up by extraterrestrial life forms of advanced intelligence who long preceded us. Through directed panspermia, they inoculated DNA or living cells onto our planet once its surface had cooled adequately—evolution then followed Darwinian processes. Panspermia reduced dramatically the time needed for evolution, given that the time required for unaided synthesis of the hypercomplex DNA molecule would be no less than this planet’s current age. It is supposed, however, that as intelligence evolved, galactic influences speeded up the convergence of intelligent terrestrial organisms with similar entities already existing off planet and human space flight and the recent technological revolution was aided by reverse engineering of crashed UFOs. It is concluded that the Earth has had a long history as an incubator for intelligent life, but these species, including us, are obliged to evolve rapidly to intellectual maturity and space-going capabilities to minimize the impacts of periodic catastrophes on their planetary populations. Successive past catastrophes such as periodic Ice Ages, planetary bombardments, and extreme atmospheric temperature fluctuations, all disrupt planetary civilizations. Inspired by reading Sitchin’s conclusions on the Anunnaki, it seemed very probable that other intelligent life forms capable of space exploration would become involved in our future. In the form of the Anunnaki, these were conventionally viewed by the first translators of cuneiform writing as the divinities of the ancient Sumerians. From a modern perspective, however, there seems adequate information accumulated by the twentieth century to support Sitchin’s idea that they were extraterrestrials from the planet Nibiru, which is possibly rotating around a dwarf star captured by the sun, whose orbit intersects the solar system at long intervals. Following the last Ice Age, an Anunnaki influence is postulated for the very rapid growth of urban civilizations. The sudden transition from hunter-gatherer cultures to large cities in Mesopotamia, India, Egypt, and elsewhere are associated with mathematics, writing, skills in construction, trade and irrigated agriculture—all without extended evolutionary stages. The subsequent growth of Megalithic civilizations worldwide originated by the Anunnaki saw the birth of common supporting technologies not yet understood by contemporary science. Amongst these was the construction of pyramids worldwide similar to those found on Mars. Evidence is accumulating that pyramids were not primarily tombs but, quite possibly, energy generators. A genetic intervention by the Anunnaki converting prehumans to effective workers is addressed in Sumerian accounts. Recent studies of human genotypes support the idea that the prehominids encountered by the Anunnaki were genetically modified to become useful workers and eventually gave rise to modern human beings. An extensive group of enclosures and associated terraces for food production discovered in southern Africa suggests these may have been constructed to accommodate and feed slave labor working the ancient gold mines in the vicinity. The product was shipped back to their home planet, Nibiru, to be used in monoatomic form to counter a climatic crisis. The subsequent northward African migration of modified humans and Anunnaki to Sumeria and ancient Egypt is mentioned. Early biblical texts from Genesis and the Book of Enoch parallel even earlier Sumerian accounts of actual events, such as those of the Garden of Eden and Noah’s Ark. The fable of the Tower of Babel may also stem from an account of Mesopotamian humans erecting a ziggurat as a signaling device for extraterrestrial vehicles, provoking the Anunnaki to prevent space technology falling into human hands. They dispersed the humans into different communities worldwide, where isolated groups of this relatively short-lived species soon diverged linguistically from a common tongue. This successful Tower of Babel principle is unfortunately at the basis of our mutual incomprehension between different linguistic groups and has fomented many armed conflicts and racial discrimination.

John Caddy trained as an ecologist, and used multi-disciplinary methods in his career to implement conservation strategies for marine resource users world-wide. He later employed information from different sources to study shamanic traditions and the role of vital energy. An interest in extraterrestrials (ET’s) came from realizing that many early beliefs and practices probably originated from off-world contacts. Participating in a recent field experience led by Dr Steven Greer reinforced his view that advanced ET’s exist, and are mostly interested in human civilization from a benign ‘parental’ perspective. This will hopefully lead to closer contacts once their role in our history is recognized.