Conversations with My Wife After Her Death 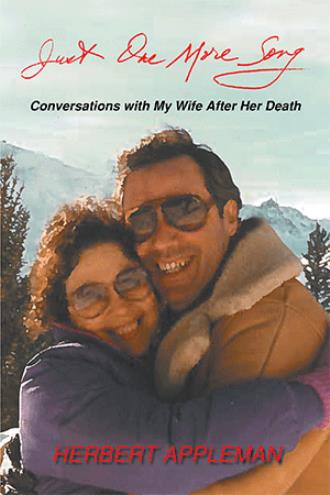 Just One More Song is Herb Appleman’s account of coping with loss and grief following the death of his wife, Dee. It’s also the celebration of a marriage that was a love affair for forty-six years. The book takes the form of a diary that Herb kept during his first fifteen months of widowhood, and the entries are, for the most part, his conversations with Dee. These weren’t mystical experiences but, as Herb says, “as real as memory, imagination, and love are real.” They came about because he couldn’t sleep. Even sleeping pills didn’t help. Nothing did, until one night, when he remembered a scene from the movie Sleepless in Seattle. It was a scene in which Tom Hanks played a character who’d been recently widowed and was having trouble sleeping. Out of the blue, he imagined his dead wife sitting on the other end of the sofa, talking to him, and he felt comforted. Herb thought he’d give it a try and imagined talking to Dee. It worked. From then on, knowing he could talk to her at the end of the day gave him something to look forward to, and after they talked, he found it easier to sleep. Their conversations were triggered by things that happened on a particular day but ranged, as conversations often do, over the whole of their lives. The tone of the book is set in the dedication, which begins, “Nearly every night before going to sleep, Dee liked me to sing to her. The song she’d pick would depend on her mood or the occasion, if the day was special, or simply on the time of year. On the first day of fall, when the colors began to change, she’d always pick ‘Autumn Leaves.’ More often than not, after I finished, she’d say, ‘Just one more song. This time you pick it.’” The dedication ends: “For Dee, in loving memory, just one more song.” Just One More Song is enhanced by personal photos and reproductions of Dee’s artwork; it’s a book to treasure and tell your friends about, especially if they’re in mourning or if they still believe that romantic love can last a lifetime. And longer.

In his long career, Herbert Appleman has been an author, playwright, lyricist, composer, writer & producer of documentaries for television, professor of English & Theater, and lecturer on the American musical (Metropolitan Museum of Art, Lincoln Center, Harvard Club of New York, universities throughout the country, and cruise ships around the world). A Perfect Gentleman, his comedy about Lord Chesterfield, won the American Playwrights Theater Award and has been produced many times on both sides of the Atlantic. Dauntless Dick Deadeye, his new version of HMS Pinafore, was produced by the Open Air Theatre in London, and that production was nominated for a 2006 Olivier Award. Heyday, his musical comedy based on the Ring Lardner story “I Can’t Breathe,” was produced by the King’s Head Theatre in London and later won the American Musical Theater Festival Award. …And Suddenly You’re Alone, his documentary about widowhood, won an Emmy Award. Mr. Appleman was educated at Harvard (BA), Columbia (MA), and the Yale School of Drama (playwriting fellowship). Over the years, he has lived in New York, London, and Michigan; he now lives in Westport, Connecticut. His website is www.herbertappleman.com.