The Thing of Beauty is a Joy Forever

A Colorful Life of an Immigrant in America

by Frank A. De La Rosa 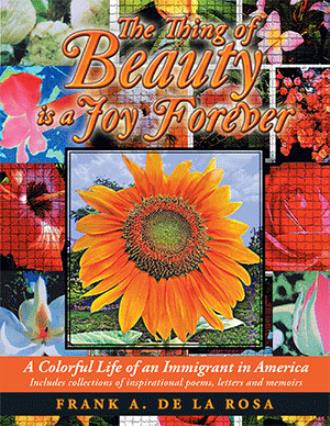 The Thing of Beauty Is a Joy Forever is created based on a famous quotation from a world-renowned English poet during the early part of the eighteenth century. His name was John Keats. Frank liked and loved his works. In his love for photography, he came to like taking beautiful pictures of almost everything that he saw with his eyes.

Frank started his early education in the Philippines. He was behind in his schooling because of the World War II, which started in Europe in 1939 and spread throughout the world—that includes the Pacific Islands, from 1941 to 1945, after the bombing of Pearl Harbor. Frank finished his elementary education (PCES) in 1952 and secondary education (CAIC) in 1958 in his beloved hometown of Panganiban, in the province of Catanduanes, Philippines. He graduated with honors in elementary and as a valedictorian in high school. Using his diploma as a passport to college, he was admitted to the Araneta University in Rizal, Philippines. As a valedictorian, he was offered a full scholarship at the Department of Engineering, taking a course in agricultural engineering. He graduated with flying colors at AU, with a degree of bachelor of science in agricultural engineering in 1963. His yearning for higher education doesn’t stop here. After college graduation, he was admitted to the graduate school at the University of California, Davis, at the Department of Agricultural Engineering in 1963, which was focused on irrigation management and soil conservation from 1963 to 1965. In 1967, he was awarded another diploma in bachelor of science in mechanical engineering at the Heald Institute of Technology in San Francisco, California. After his academic pursuits, he worked for a major engineering corporation at the Eastern United States. He retired later in Florida, enjoying his hobby—gardening—with his beloved wife, Mary Grace, their children, and eight grandchildren. However, his beloved wife died in Florida after a long illness in March 30, 2016. Goodbye, my love.