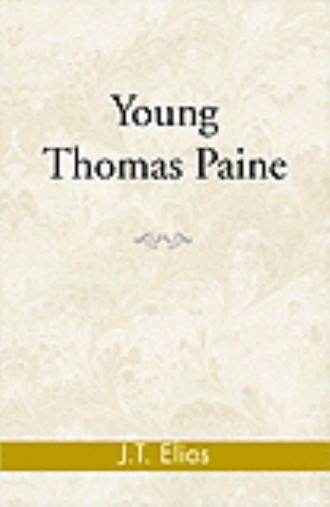 Much has been written about Thomas Paine, his contribution to the Independence of the United States of America and Paine's writings that inspired the American colonials to  break away from Britain. Yet little is known about his youth. What is known is the basis for J. T. Elias's weaving a story about how the character of the giant polemicist was sculptured.

Thomas Paine was born in  small village north of London. His father was a Quaker, his mother a Church of England adherent. Both left their marks on the growing child, but that of his father and his ideals were much stronger. The small village life was formalized by the  King and the aristocracy, but from his youth Tom Paine was fed with draughts of rebellion, not only by his father's dissenting religion, but by his tutor, a former pirate who had become a priest, and by his wide open eyes as he saw the injustices he saw all around him.

School for the lower classes was not usual, but his father and mother arranged for him to attend a free local school founded and funded  by a liberal aristocrat. There Paine was instructed by the former pirate who, because of his experience in the world, unnoticed, gave his students a broad education, one which influenced the bright young scholar. However, that education ended at the age of thirteen, when young Paine was then apprenticed to his father's trade as a staymaker, catering to middle class women.

The Young Thomas Paine, though, his extremely bright  mind not satisfied with a humdrum   existence, fled to the life of a privateer, the polite word used to describe pirates who lived on the capture or despoiling of foreign ships. This trade he followed for three years. But the crass motive of seeking gold was not for Young Thomas Paine. He returned to his  home, worked for his father for a few years, then set off for London, as young, ambitious people do all over the world, seeking something elusive in a big city.

For a while he taught in private schools, tried to start a church, then returned to his trade in Dover, then to Sandwich. There he met his wife. But she lived only a year, the happiest year of his life, one that gave him warm memories until he died.

After her death he studied to become a customs officer, passed the test, was assigned to Alford, on the coast near King's Lynn. Because of his pity for smugglers who were poor people trying to make a shilling, he was not strict enough for his superiors and he was fired after only a year. So he returned to his trade as a staymaker, then back to London. Unsatisfied, he wrote a begging letter to the Customs Service, was given his job again, ended up in Lewes, sixty miles south of London. There he found intelligent men, meeting in The White Hart Inn regularly as the Headstrong Club. At the meetings, he honed his speaking and writing talents. His fame spread, he was asked by the Customs officers all over the country to represent them in London to try and get some alleviation for their plight as poorly recompensed civil servants.

In London, he made the rounds if the MPs in Parliament, but met with little favor. For them he wrote a pamphlet, pleading the cause of his fellow agents which lives on today in all anthologies of his work. While staying in London, he frequented the Coffee Houses, which were the meeting places of great men where they discussed topics of the day.  There he met Sir Joshua Reynolds, Oliver Goldsmith, Samuel Johnson, Edmund Burke, Richard Brinsley Sheridan, and best of all, Benjamin Franklin.

His work for the Customs Agents fell on deaaf ears. The money to help them was requested instead for paying several hundred thousand pounds for King George's expenses.   Because of his absence from his post, Thomas Paine was fired.

Listening to Benjamin Franklin's advice, and with a letter of recommendation from Franklin, he left England for America.

The Author, J. T. Elias, grew up and was educated in Wilkes Barre, PA, went to college at Loyola in Baltimore. He served as a gunner on a heavy bomber over Europe during World War II and was awarded the DFC, Purple Heart, Air Medal with five Oak Leaf Clusters. After the war he traveled all over the United States and Europe, married an Irish girl, worked on a railroad after giving up a business. His four children are scattered all over the U.S. and Spain, with four grandchildren to lure him to visit. He lives now in Nanticoke, PA, writing, playing poker, reading, visiting friends, and thinking.