Sagebrush and the Never Summer Mountains 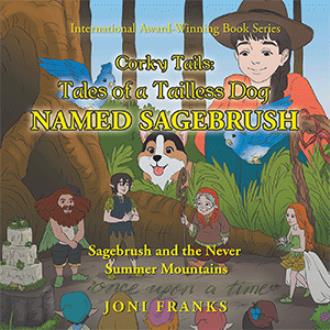 To Sagebrush Through thick and thin we’ve traveled You always by my side Exploring and adventuring Seeing what we may find These mountains aren’t an easy place But we chose to stay You always waking up beside me To greet every single day Thank you, dear Sagebrush I never want our time to end But mostly I want to thank you For being my best friend Corky Tails: Tales of a Tailless Dog Named Sagebrush Sagebrush and the Never Summer Mountains Hidden amidst the clouds lies the mystifying alpine region known as the Never Summer Mountains. Here, lush natural meadows provide a setting that is bursting with skunk cabbage plants and chokecherry bushes, and high-altitude water bogs that some say are inhabited by fairies. Yellow bellied marmots and coal black Albert squirrels make their homes here, where the growing season is short, and the trees are six hundred years old. Shadowed by stillness and a quiet calm, the snowcapped peaks of the Never Summer Mountains gleamed radiantly against the night sky. Well-known for fierce howling winds, deep snow pack and unexpected blizzards, very few humans pass through this remote region. As the full Thunder Moon of July rose high in the starless sky, even the wind held its breath in anticipation of the squall that was already brewing, just before the first bolt of white-hot lightning exploded through the alpine tundra. The sound was deafening, and the earth trembled and shook as the raw power of nature gave fair warning of the destruction that was to come. A faint rumbling sound began, as a mass of broken trees and saplings propelled by gravity, cascaded at a rate of fifty miles per hour down the slope of Stormy Pass. Monsoonal summer thunderstorms had triggered a massive landslide, striking without warning, and gaining in momentum, collecting broken trees, and driving them down the mountainside, across the remote forest road, and upward against the opposite mountain. Meanwhile on the other side of the mountain, the little people known as the Shuns were going about their daily tasks, unaware of the incident unfolding nearby. The Shuns who stand only six inches tall, had been driven to the Never Summer Mountains by the humans who clear cut all the trees the Shuns once made their homes in. Over time, the Shuns formed a village, living in the tree holes offered to them by the Young Miss, on her cattle ranch. Here they could live out their lives in peace and safety, free of the threat of their homes being destroyed. It was a perfect summer morning for gathering the wild asparagus and plums that grew freely alongside the banks of Froze Creek. Clover Leaf, the Shun, was busy filling his basket with the natural bounty that nature provides. The heat of the high-altitude sunshine relaxed his muscles and warmed his back as he went about his gathering, his mind in a faraway place. Lately Clover Leaf had become easily distracted, lost in his own thoughts, and feeling dazed and dreamy. He looked surprised as he heard the plunk of fresh plums landing on the ground from his overly filled basket. He had been in such a daze he hadn’t realized that his basket was already full. Feeling silly he stopped his gathering to take a rest on a nearby tree stump. His mother had named him Clover Leaf because it is said that the three leaves of a clover stand for faith, hope, and love. Clover Leaf’s mother had raised him to know that if he kept all those things in his heart, he would live a fulfilling life. Clover Leaf already knew a lot about faith and hope. His dear mother had recently been stricken with the blue flu. No one seemed to know what caused the blue flu or just how long it might last, but Clover Leaf had all the faith and hope in the world that he could cure her of the blue flu she suffered from. 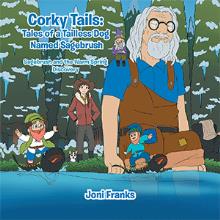 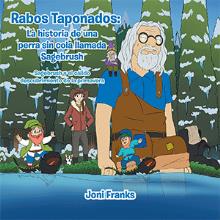 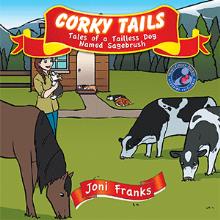 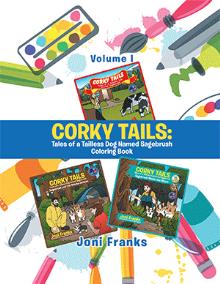 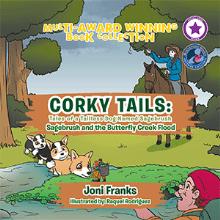 Hidden amidst the clouds lies the mystifying region known as the Never Summer Mountains. Here, lush natural meadows provide a setting that is bursting with skunk cabbage and chokecherry bushes, and high-altitude water bogs that some say are inhabited by fairies. As the Thunder Moon of July rose high in the starless sky, even the wind held its breath in anticipation of the squall that was already brewing, just before the first bolt of white-hot lightning exploded through the alpine tundra. Follow the adventures of Sagebrush, the tailless puppy, in her high-country adventure as she journeys through the Never Summer Mountains with her companions to clear a colossal landslide that has jammed Froze Creek with rubble and blocked the local water source. From international award-winning Author Joni Franks comes the seventh book in the Corky Tails book collection. This story addresses belittling, the value of teamwork, and making judgements based on appearance, all woven into a fairytale setting, with a surprise ending that will melt your heart.