The Story of Toledo Scale 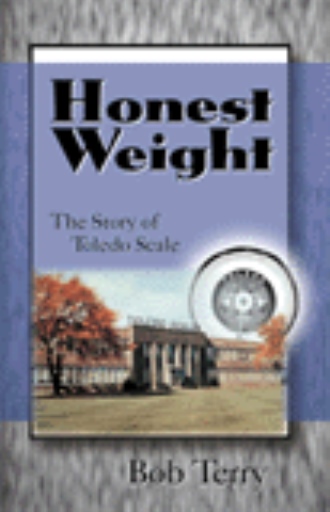 Honest Weight is the 20th century story of Toledo Scale, beginning with their fight in the first decade for weights and measures laws to outlaw dishonest scales.

In narrative form, it tells the living history of the company, beginning with the founder after he was dramatically fired by National Cash Register Company. Henry Theobald then started a scale and cash register company to compete with his old boss, the legendary John Patterson of NCR.

It’s the story of the inventors, leaders, craftsmen and technical breakthroughs, beginning in the first year of the 20th century up to current times. Included is the story of the innovative sales techniques developed by Theobald that led to tight-fisted merchants being willing to spend four and five times as much for a Toledo “No Springs—Honest Weight” scale than for the scale it replaced. This led to Toledo becoming the best known scale brand in the nation.

It includes the story of how a plastic came to be developed for Toledo Scale under the leadership of the company’s second president Hubert Bennett that led him to establish a separate, wholly owned company. This company, Plaskon, became the largest plastic company in the United States for a brief time.

It tells of Toledo Scale’s World War II contributions in which the company played a top-secret part in the production of the Norden bombsight and the atomic bomb.

The story includes quotations from both retired company executives and current employees. It includes information obtained from an unpublished factual manuscript covering the company’s first 50 years, other company archives and the Toledo Blade.

A dozen historical photos are displayed, which include the first DeVilbiss computing scale, a Toledo Cash Register, and a Phinney scale which was the first patented computing scale. A few Phinney scales were manufactured in 1870. Since Toledo Scale couldn’t locate one to prove they were actually manufactured, they lost a huge lawsuit to Dayton Scale that almost broke the company.

Also shown is a photo of Norman Bel Geddes’ 1929-30 radical designs of a new factory and plant campus for Toledo Scale, never built due to the depression.

The story includes the transition to electronic scales begun by the company’s third president Harris McIntosh. This transition was completed in the final quarter of the century. And finally, the human story that resulted from the evolution of several different ownership’s is told, until just a few years ago, Toledo Scale disappeared as a separate brand and was merged into Mettler-Toledo, Inc.

Bob Terry is chairman and co-owner of Terry Robie Communications, a full service marketing communications agency located in Toledo, Ohio. The 20 year-old firm specializes in all business-to-business marketing communications. He worked for Toledo Scale for about 15 years in advertising, marketing, and finally as their advertising manager. He resigned from the firm when they moved their headquarters from Toledo to Columbus in 1976, and founded his marketing communications agency with partner Jan Robie. His agency has worked with Toledo Scale Company and its successor firm Mettler-Toledo, Inc. for most of the succeeding years. Terry is a skilled public speaker. He has competed as a finalist in a Toastmasters International Speech Contest. He is a member of the Business Marketing Association. Terry is also an active pilot...a member of the Aircraft Owners & Pilots Association, and the Experimental Aircraft Association.