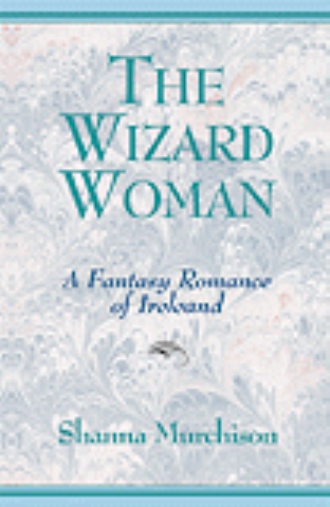 The Wizard Woman  is a must for all lovers of romance, fantasy, and historical fiction!

A druids' compound on the south coast of Ireland is raided by Vikings. They have been betrayed by one of their own.  A young man escapes in a boat with a baby girl with flaming auburn hair...

An enigmatic stranger appears at the betrothal feast of Dairinn Ni Ciardha, an eighteen-year-old with flaming auburn hair, to observe the festivities.

Dairnn's aunt Mebh warns her not to marry her Norman suitor if she does not love him.

Dairinn sees Senan and falls in love with him instantly. She elopes with Senan, though she has no idea who he really is.

Once she is gone, her cousin Bearach, in league with the Normans, slaughters her father and anyone else who gets in the way of him taking power as head of the clan.  Her cousins Conn and Fergus are left at Bearach's mercy, and Dairinn's once-great home of Rathkeel is burnt to the ground.

Senan has been cursed by his mentor Odhran for leaving the druids' compound to choose the path of the warrior. He has been fated to marry Dairinn and have a child who will one day help restore Ireland to its former glories. Even Odhran is stunned, however, at the power flowing from Dairinn, though she has never been trained as a druid.

Senan brings Dairinn to a cave by the sea.  She learns to trust him, and know the ways of the druid, such as herbal medicines, divination, and so on. Senan is surprised to find that she can break all of his spells.

Senan next trains her in the way of the warrior.  Surprisingly, she also defeats him in battle.

Whree do her astounding powers come from? And can she use them to stem the tide of invasion before all she loves is swept aside forever?

In a final apocalyptic confrontation,  the wheel of fate comes full circle.

A spell-binding blend of history, fantasy, and romance which will haunt you....