In One Year's Time 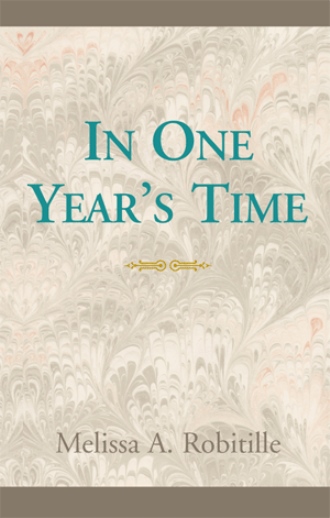 In One Years Time, by Melissa Robitille, begins with Elizabeths death. But no ordinary death this! Elizabeth, she is told by her flamboyant guardian angel Dickon, is to be given a second chance at life, but in 1808! How is a modern girl to manage that, never mind the condition of her second chance? She has to find someone who needs her within just one year. By her introduction to her grandfather, Elizabeth might be off to a good start, but nothing ever goes quite that smoothly for Elizabeth. She meets, and falls in love with, a most independent and stubborn man. Duncan Blackstone is a fine figure of a man, indeed, but has the stubborn nature of a mule to go along with his handsome face.

Both Elizabeth and Duncan must first deal with their own hearts and issues before they can admit that they need each other. Elizabeth, after an unspeakable childhood, has problems believing even that Duncan loves her. She doesnt like herself, and doesnt see any particular reason for anyone else to do so. Duncan has his wifes death on his conscience, and quite honestly feels like somewhat of a dirty old man for falling in love with such a young girl. Beyond that, as any man will, he has quite convinced himself that he doesnt need anyone now, nor will he ever.

These central figures have help from all sides. Dickon, Elizabeths guardian angel, is waiting for his own second chance with Millicent - Duncans guardian angel. The pair of angels will do all in their power - and even cheat once in a while! - to ensure that Duncan and Elizabeth reach the point of needing each other, but will it be enough? Ian, Elizabeths grandfather is a lonely man, overjoyed to have family again, but even he falls in love - with the dressmaker! Sofie, a widow, is quite set in her belief that Duncan and Elizabeth should be a pair, and that very match making tendency throws her into cahoots with Ian, and love soon ensues. A cast of memorable characters toss Duncan and Elizabeth together, but their own insecurities pull them apart again and again. It seems like nothing can help this pair.

Melissa writes, juggles hobbies, and raises her three children - and husband! - in Northern Vermont. She’s deeply interested in History, and, like most of us, sometimes wishes she could live ‘back then’!