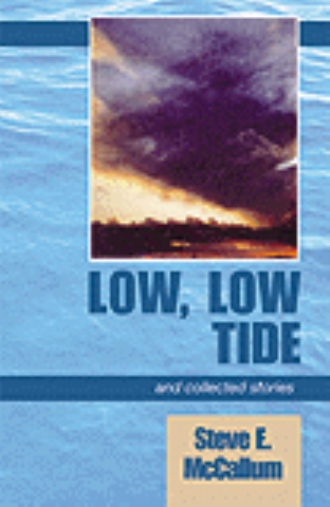 Precise writing that captures the human values we all have, coupled with an honest expression of the sometimes wry truths we encounter--these mark the stories of Steve E. McCallum. Sometimes terse, sometimes romantic, they range the gamut of human experience in a clear style that holds no punches. McCallum uses the shock value of violence and the soothing ride of romance to carry his characters through terrain we recognize. Each story carries the beat of realism and convincing truth of life we know. You will recognize yourself in them.

The title story, Low, Low Tide, was born in the backwaters of the Florida Keys. McCallum spent a year as a National Ocean Survey tide observer during his 13-year sojourn in Key West.

"Best job I ever had," he grins telling about it. "Imagine actually getting paid to go out gunkholing in your boat. And you meet people, see things and hear enough stories in the Florida Keys to keep a writer busy for life."

Behind the story of Low, Low Tide, as with most fiction, lies a boy named Bud that McCallum knew: a bearded happy-go-lucky who lived a hand-to-mouth, free-soul existence life on a boat. And there were girls, lots of them--in fact one named Laurie--who made a living at this and that, including cleaning and polishing expensive motor and sail cruising toys of the rich. McCallum often saw them, talked with them when he went about repairing marine radios on expensive yachts. And although there are lots of rough guys in the Keys, like Leon Rizotti and Bobo Wisconsin in the story, people who can kill without compunction, rough guys are not necessarily evil murderers.

"In fact, my best friend in the Keys was a fellow I would not have enjoyed tangling with, yet he was gentle as a kitten. His name was Homer and he had traveled across the nation in his lifetime working as a construction electrician--the Hoover Dam in Nevada, Holland Tunnel under New York's Hudson River, the Los Angeles Aqueduct, the Ford Assembly plant in Louisville. You name it.

"But if you had an enemy, Homer was ready to help you 'do away' with the bad guy. He said an accident is not hard to plan. Once he told me, 'I never done away with anyone who didn't deserve it.' I never asked questions. That part of a man's life is a part that's really private."

But the bad guys in the Keys are by far outnumbered by the good guys like Rene Faurot and Benny Werpel--gentle guys, but ready to spring into violent combat for what they believe is right.

As with many island populations, there are the natives and the "newcomers." And even though a newcomer has lived there 99.9 percent of his life, he still is a newcomer. And that is that. McCallum found that when he served in the U.S. Coast Guard on Nantucket in World War II. His landlady had lived on the island for more than 50 years, but she still accepted her status as a newcomer, not one of the native-born, who were called Nantucketers.

The same is true on Key West. The natives are called "Conchs" (pronounced 'conk.' please!), and the other residents are Key Westers. (And don't you forget it, sir and madam!)

Key West is a friendly place that's different. Folks there, both Conchs and Key Westers, maintain a wary friendliness--but far from the sugary sweetness of the Great South. And Key West's wariness is not like the cold shoulder approach of New York City where a New Yorker will calmly step over a drunken or dead body and proceed on his way. Key Westers will easily welcome a stranger into their homes; but the welcome can be short-lived at a hint of ingratitude.

Bud Meadows flares up at such a hint. The reader finds this as Bud blows his top when frustrated at the girl he had picked out of the water. She's thankful enough for being taken aboard his skiff. But her refusal to talk irks Bud to the point where he would cheerfully toss her back into the sea.

Some readers have questioned the wisdom of Laurie's plan to survive the death voyage. They

Steve E. McCallum's stories are marked by a gritty style and a touch of heart. He was born September 15, 1912. A graduate of the U. of Missouri Journalism School, he worked as a reporter on newspapers in California, Missouri and New Jersey and as staff writer with the Associated Press. In World War II he served as ship-board radio officer in the Coast Guard in the South Pacific Theater. He has maintained a lifelong interest in amateur radio and the American Radio Relay League (as K4URX and W2ZBY). He lives today in Lexington, Kentucky, with his wife and a wise old dog whose name we are not going to tell you because it would give away the plot of one of these stories.