You Don't Have to Act Your Age 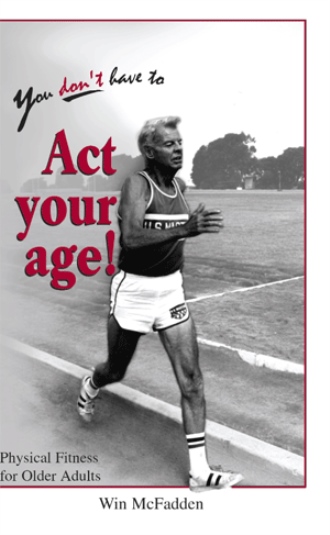 All Aboard the Train of Thought
Paul F. Cummins Illustrated by Peter Bedgood
£25.95

Win McFadden, now in his nineties, is an international senior track and field star who still participates in U.S. Masters and Senior Olympics competition.  In You Don’t Have to Act Your Age, he has written a book with a radical mission:  to convince the many millions of people over the age of 65 that the remaining years of their lives can be healthy, joyful ones.

He poses the following questions:  “Suppose that in our effort to be as healthy as we could possibly be, we engaged in a pursuit that also let us have fun—and that while having fun we became totally absorbed and therefore willingly disciplined in our efforts?  Suppose further that because of our dedication and discipline, we were eventually rewarded by public recognition and tangible rewards?  What if as our days sped by in this happy, rewarding, and disciplined existence, we also met large numbers of friends who were similarly healthy, dedicated, and interesting?  And suppose that through the friends we made and the recognition we received we became able to be of service to other older people who needed help in bringing themselves to a condition of greater health and fitness—and therefore happiness.  That would be true satisfaction of the highest order.”

He claims that his positive answers to these questions have been the result of his participating in Master’s athletics and teaching physical fitness classes for older adults.  In this second edition of You Don’t Have to Act Your Age, McFadden has added tips for seniors on how to choose an exercise class that meets their needs, as well as advice for younger relatives of seniors who now live in convalescent facilities on how to encourage their loved ones to remain as physically fit as possible.

Paul F. Cummins is the Executive Director of the New Visions Foundation in Los Angeles. He has been the primary founder of New Roads School, a co-founder of Camino Nuevo Charter Academy, Los Angeles Academy of Arts & Enterprise Charter School, and the New Village Charter School. Before New Visions, Cummins was the primary founder and headmaster of Crossroads School and founder of P.S. Arts. Paul is a poet who has published two collections of poetry: A Postcard from Bali and Under Cover. His book for adults on understanding poetry is titled Why Poetry? Reflections on Poetry, Writing, and Culture. PETER BEDGOOD has been drawing since he could hold a pencil. When he’s not illustrating he enjoys performing stand-up comedy, performing and listening to music, writing, and acting. This is Peter’s fourth illustrated work; some of the other titles are The Case of the Missing Blanket and Monster Street.