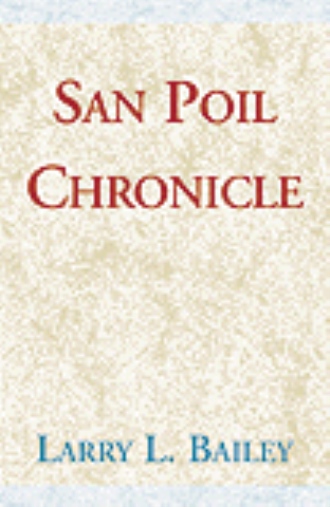 This book is two novels in one cover.  The first novel, BIRTHRIGHT, was received warmly by reviewers and readers.  Larry L. Bailey made many media appearances on the West Coast in which he discussed the issues behind the novel such as the loss of the family farm and the consequent danger to the long-term food supply.

BIRTHRIGHT is not a political tract, however, it is the powerful story of a traditional American family driven ever westward by changing climates and economic conditions until they finally are faced with the loss of their farm and, more importantly, the loss of  the way of life they had followed for countless generations.  All this comes crashing down on Harry Isaacson, the heir to the farm, on the morning of the auction.  As he makes his final rounds of the old place he recalls his own life, that of his parents and his grandparents, and he gropes for an answer that will allow him to continue farming and pass the knowledge on to his own children.  He must not break the chain of life on the land.

Harry's Native American wife, Judith, is gone with the children, moved to the city to survive.  Harry does not blame her for her loss of confidence in him and her doubts about his determination to farm.  But somehow he must convince her to return and he must start over as a farmer, a husband and a father.  He has no land, no equipment and no money.  In fact he may owe the bank a small fortune when the auction is over.

Harry hates the young banker whom he blames for the family's predicament.  He remembers the ease of death when he was a soldier in Viet Nam and wonders if he shouldn't just take care of the banker with one easy shot.  He knows that won't really solve anything, yet it tempts him.  It would feel so good for a little while.  He remembers his grandfather's wisdom and the teachings of Long Joe, a Native elder and relative of Judith, and he tries to steady himself, to face his bleak prospects with courage and grace.

While Mom prattles about their problems being God's will, Harry and Dad watch the glib television announcers make excuses for the wave of farm bankruptcies sweeping the country.  Harry goes back outside to the company of his dog and his last few hours on the farm.

Auction day is a torture as Harry watches his family's possessions sold.  Particularly painful is the loss of his Grandfather's tools and equipment which have been with the family for more than a hundred years.  Then, as the auctioneer and the crowd move towards the corral to sell Judith's mare, Shadow,  Harry is afraid he will lose control.

The story is resolved in a breathtaking ending full of twists and surprises.

COVENANT continues the story of Harry and Judith as they struggle to start over on a long-abandoned farm on the banks of the San Poil River on the Colville Indian reservation.  This beautiful Valley of the Cliffs is the ancestral home of Judith's people.  The family must live in a tipi and work the soil with Harry's grandfather's last draft horse, an ancient mare.  Almost no one believes they will succeed.  From skeptical neighbors to authorities outraged at their primitive living conditions, they meet resistance everywhere they turn.  Only Walt and Frances, an elderly farm-couple facing their last days will help them.

Harry begins to find markets for the fine produce they coax from the soil.  Walt helps him get a team of young horses to replace the old mare and soon they are able to build a cabin and live a more comfortable life.  But the resistance to them continues.

The bank demands payment on the remaining debt from the farm sold at auction.  The neighboring rancher wants their place as part of a development he is planning and will go to any lengths to get it.  A group of survivalists, outsiders who have moved to the valley, form a militia gro

LARRY BAILEY lives on a ranch in the Okanogan Highlands. He raises and trains horses and is a community activist as well as writing contemporary fiction and continuing the traditions of the American West. Larry operates BookMountain, a retreat center.