Steward of God's Mysteries In Seasons of Grace 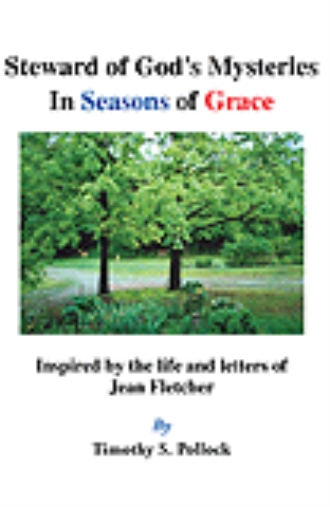 This is a story about Jean Fletcher, a spiritual icon to those who have come to know her personally. From the moment she makes contact something touches you deep inside. Immersed in Life, Jean shines forth lightenment through nature and experience. She is portrayed through the eyes of a deeply religious and judgmental - yet, impressionable young man – Tim.

As the story unfolds, both lives intertwine, leaving each changed and Tim’s life turned outside in, by connecting “observable events” to their hidden internal reality. The omniscient – God, by His transforming power awakens young Tim to the “newness” of his knowing. Beginning on page one, Jean accepts confirmation of her ministerial commission. Tim enters the scene taking the reader into his cold, ritualistic world, crowned by Christian tradition. His church going friend (Darlene) brings Tim to Jean’s home where the two first meet. Tim immediately connects to their eternal union – “It was almost as though we were being reunited in a relationship that went as far as the beginning of time.”

The youthful Tim impressed and intrigued by Jean’s zeal and spiritual posture presses for the tale of her life. Speaking in a soft-spoken voice of authority, Tim listens for hours to one “as though she had been personally trained by the Master Himself.”

With a pierced mind, he hears “Truth Is – the learning to identify with that, which is Within You, rather than that which is without.”

In one day, one meeting, in one seemingly motionless eternal moment, destiny places Tim on the threshold of Life in Spirit, contrasted by the road of his traditional beliefs. Days and weeks pass; unsure of the journey he knows he must take; Tim searches the scriptures, listening to that still, soft, subtle voice, asking God for guidance and understanding. He begins to challenge the doctrines of men. It’s spring of the same year, and “change is eminent.” Fearless and partially free, Tim arrives at Jean’s to find her toiling in her garden. “Spring is a time for weed pulling, but the uprooted plants were not weeds. There is life in these bulbs – unless the bulb is planted in the earth, in the darkness, and covered over – it could not fulfill its purpose in Being…the entire process of nature…all part of a more perfect order.”

Relocating to the house, Jean shares more after surviving a cup of Tim’s soapy coffee. She tells him of how “God is Divine Order,” and “every man” has a walk out of darkness back to God. NONE are excluded!

By chapter three, Tim is “letting go” of his traditions - the mind’s illusions, inhaling the reality of life in Spirit. He experiences the realm of “knowing” to a place Jean calls “beyond the beyond.” The natural mind will never comprehend the real “Truths of Spirit,” – mysteries – secrets hidden deep within God – delivered by grace to His chosen stewards.

The “seasons of grace” change their color as Tim leaves his spiritual mother, and the close relationship he has, so embraced. “Except a corn of wheat fall into the ground

and die, it abides alone. The understanding of divided self needed to be fully realized.” Only after years of much needed pruning would the purpose of their separation come to light. Tim plunges head first into blissful, wedded joy. Unfortunately, within a few short years his marriage crumbles, and the fall leaves him feeling lost and bewildered – “searching for answers I thought I once owned.” Jean’s expression, “being ground to powder,” rattles around in Tim’s distant memory. Riddled with quilt and full of shame, Tim, radically, relocates to the home where he grew up. In Pittsburgh, he takes the time “for solemn self-examination,” to try somehow to begin again.

Jean and Tim reunite. Transitioning from the night back into the ever-forgiving light, Tim experiences Jean’s compa

Tim was born November 9th 1959 in Birmingham, Alabama. Shortly after birth, his family moved to Pittsburgh, Pa. where he remained for most of his childhood. At the age of fourteen, Tim first opened to God in a deeply emotional and personal way. Since the mid-seventies, Tim has assisted leaders and laypersons from varied religious and spiritual assemblies for the purpose of teaching, encouraging fellowship, and offering prayer. Tim is a free-lance writer educated at the University of Maryland, and NC State. He now lives in Holly Springs, North Carolina with his wife Marsha and daughter Jessie.