The Father of Man 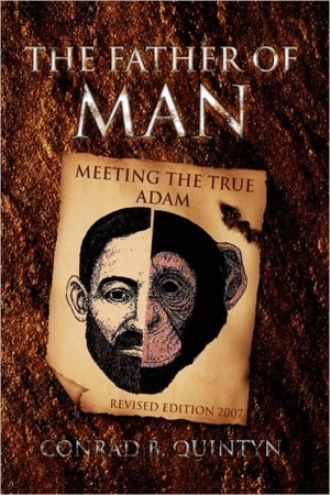 This book is not a cheap sci-fi thriller about aliens. This book presents a what-if scenario rooted in fact and fiction. What if one of us, a living Homo sapiens, was fortunate enough to meet an Australopithecus—one of our earliest ancestors? What would happen in the first meeting? After all, we are morphologically and temporally (two million years) very distant from australopithecines. If extraterrestrial interference caused this meeting to occur, again, what would happen in the first meeting? How would you interact with this creature? How would you communicate? Could you teach this creature “language”? Does it have the cognitive ability to learn language, as we know it? Or does the creature have its own form of communication? Does the creature use tools, or will it watch you make tools or use fire? Will you be directing or changing evolutionary rates if you teach it any aspects of modern behavior? Furthermore, what if you discovered, with great distress, that the high pedestal humans place themselves on—nearer to “God” and “angels”—is not real and just a product of Judeo-Christian belief systems explained in Aristotelian terms as the scalae naturae or the “Great Chain of Being”? In other words, what if our origins are more humble? For instance, what if humans came to be as a result of an experiment in which extraterrestrials accidentally created an “infection” that was lethal to them but critical in how we came to be? What if this “infection” produced Homo sapiens? These are the major themes in this thriller. Bartholomew Snide, a relatively new British geologist, accepts a temporary position with the Kenyan Department of Interior. He took the job because his prospects for an academic position, fresh out of graduate school, were very poor. He flies to Kenya, landing in Nairobi, and soon he is bombarded with questions about “the secrets of Koobi Fora.” He then meets his employer, the refined and secretive Sir Reginald Creighton-Phillips and his circle of close associates, including the Kenyan minister of interior himself. These individuals are impressed with Snide’s knowledge of geology, archaeology, and, curiously, exobiology. Snide would discover soon enough that he was secretly investigated and handpicked for the job; the application process was just a formality. Snide’s suspicions about the job took hold early on, beginning with the airport official’s inquiries into the “secrets of Koobi Fora,” and later becoming aroused every time he saw Sir Reginald and his cronies huddled together in the darkness in deep conversation. Snide eventually saw Sir Reginald’s grand complex, and for a few days, he believed that this complex was the so-called “secrets of Koobi Fora.” But he was wrong. Sir Reginald had another surprise in store for him. Apparently, years ago, Sir Reginald had discovered a pristine cave while digging for diamonds. Snide was quite amazed by Sir Reginald’s perseverance and ingenuity. But Sir Reginald and his partners were hiding something even bigger than Snide would have ever imagined. Through accidental circumstances or just plain luck, Snide uncovered the real secret of Koobi Fora. But there was another secret that not even Sir Reginald knew about. Curiosity got the better of Snide, landing him, accidentally, in an out-of-control express elevator (lift) which descended to a level of the cave that was off limits to most people, including Snide. Sir Reginald insisted that no digging would be done on this level “for safety reasons.” Surprisingly, Snide found all the necessary equipment for a full-fledged digging operation. What was going on? In addition, he found boot prints leading to a different section of the caverns. Unable to resist the temptation, he followed the boot prints where they abruptly ended at a section of a wall in the cavern. Snide later discovered that this was no ordinary wall; it was actually a secret door leading into another cavern. He found the mechanism used to open this door and was