The Stream Never Dries Up 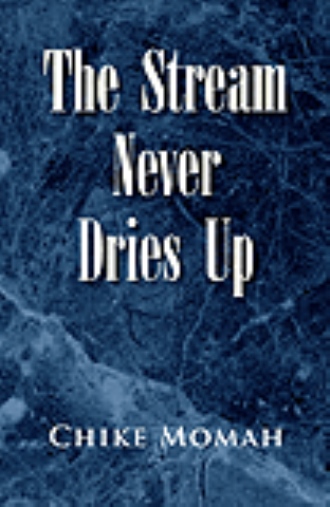 Nwafor Obiako, the narrator, is a Nigerian citizen, of Igbo extraction. At the beginning of his story, in December 1990, he has been in the United States for about nine years, and had taken his Sociology degree in 1986. On a visit to Nigeria, two years later, he is persuaded to let his mother and his uncle search for a suitable girl for him to marry. When they find one, he travels to Nigeria to meet her. Her name is Chigozie Nwokoye. Nwafor and Chigozie do a traditional – as well as a registry – marriage, and he returns to the United States. Months later, she joins him there. The story recounts the interactions between them and Nwafor’s friends: Erwin Clark, an African-American; Ben Ugonna, Nwafor’s friend from their high school years in Nigeria, and Ben’s wife Josephine. A chance and, as it turns out, momentous encounter between this group of friends and one Sylvester Onwurah and his girl-friend Juliet, sets in motion a sequence of events that sees Chigozie employed as a pianist for a night-club music band, an ugly fracas on the dance floor during an annual banquet of the Igbo Union of New Jersey, and a death that brings the police into their lives. Chigozie eventually gets what she wants above all else: a Church wedding. But Nwafor’s past catches up with him when a visitor from his past – Deidre, an old girl-friend – ruins the wedding celebrations for everybody. Which leaves Nwafor, Chigozie and Deidre seeking ways to bring some order into their convoluted lives.

Christian Chike Momah was born on October 20, 1930. He was educated at the St. Michael’s (C.M.S.) School, Aba; the Government College, Umuahia; and the University College, Ibadan, where he earned a Bachelor’s degree in History, English and Religious Studies in 1953. In 1959, he obtained the Associateship of the Library Association from the University College, London. He was the first Nigerian graduate Land Officer (1954-1956) in the Public Service of the Eastern Nigerian government. Then he worked as a librarian in the University College, Ibadan (1956-1962); the University of Lagos (1962-1965); and the United Nations, first in Geneva, Switzerland (1966-1978), and then in New York (from 1978 till his retirement in 1990). He has authored five other published novels: (1). FRIENDS AND DREAMS (1997); (2) TITI: Biafran Maid in Geneva (1999); (3). THE SHINING ONES: The Umuahia School days of Obinna Okoye (2003; reprinted 2010)); (4). THE STREAM NEVER DRIES UP (2008); (5) A SNAKE UNDER A THATCH (2008). He has written a few articles on Nigeria and on the USA. Chike Momah has been married to Ethel, nee Obi, since 1959. The couple has two sons (Chukwudi and Azuka) and one daughter (Adaora), and has been blessed with seven grandchildren, and counting. Among his contemporaries in high school and/or college are some of Africa’s most noted writers: Chinua Achebe (Africa’s foremost novelist, trail-blazer and essayist); Chukwuemeka Ike (acclaimed university administrator and prolific novelist); Wole Soyinka (1986 Nobel laureate in Literature); and the late Christopher Okigbo (considered to be Nigeria’s “finest ever” poet, as per the 15th edition of the Encyclopaedia Britannica). He is an involved member of the Nigerian community in the U.S.A., and has been honored with awards recognizing this involvement, including the first meritorious awards given by Songhai Charities, Inc., and by the Government College Umuahia Old Boys Association, Inc., both in 2003. In 2003, he was honored with a chieftaincy (Nnabuenyi-Nnewi) by HRH Kenneth Orizu, Igwe Nnewi, Anambra State, Nigeria. In 2011, the Texas House of Representatives, and the Senate, by a Resolution in each chamber, recognized him for his contributions to the literature of his homeland. Arlington, TX 76012