THE BRIGHT NIGHTS and Drumbeats from Mama Africa 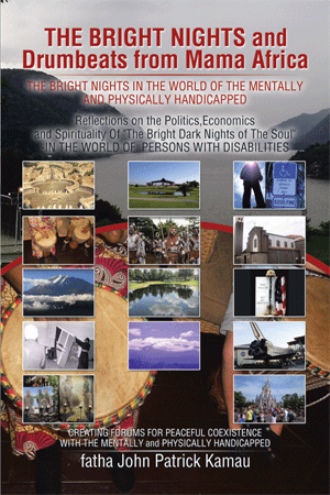 For years war and at times preventable scenarios have taken life, maimed others, crippled yet others mentally, physically and intellectually, if not spiritually, The T4 program, PTSD and all.... worldwide. For the authors generation, The 1970's brought in cholera, the 1980's brought in the AIDs/HIV scare, and then the unholy beverages, .... not without pioneering conspiracy theories to back them up Mayan.... illuminati conspiracies, Georgia guide stones and all types of fantasy. Would there be any survivors? The 20th century was dominated by ethnic, race, political and religious struggles and conflicts; the 21st century has vastly inherited the problem with a huge shift in attitude and preference, but in all this, what is the future for Persons with Disabilities in a world of alternative lifestyles, eugenics, euthanasia, acclaimed United Nations human rights and conventions? sequel to "The Bright Dark Nights Of The Soul" book - (2013) script, the author a recipient of the "Pro Ecclesia" gold medal award from the late Saint Pope John Paul II avails for posterity diaries and points for reflections on cultural and humanitarian perspectives impacting on aspects of existential crisis, search for meaning and purpose for persons with Disabilities deeper into the 21st century. With contributions and insights from Corporate social responsibility initiatives, scholars, clergy, custodians of persons with disabilities, persons who lived in the 19th and 20th century in Africa:— Some who served in the American Peace Corps in 1960's Africa, encounters with so called - "natives" and "savages", War Veterans and members of the armed forces, multicultural religious and missionary icons, contemporary peace and outreach initiatives from international religious, secular and political leaders: Towards this end, a case study paper in the United States on a Disabilities outreach project in Africa is availed in Six language translations, French, Spanish, Portuguese, English and the Luo and kikuyu African Languages to hopefully stimulate further multicultural reflections and action in the diaspora communities towards persons with disabilities.