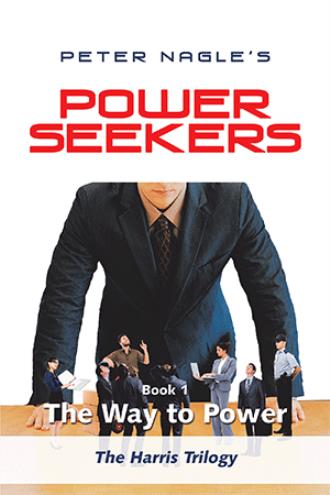 In 1970 Nagle, while living in Papua New Guinea, decides to write a fictional book about fictional people in politics and not about politics itself. He penned the title in 1972 as Power Seekers, which remains the title today. The book is a trilogy. Book 1 is ‘The Way to Power’, book 2 is ‘In Power’, and book 3 is ‘Out of Power’. Power Seekers book 1, ‘The Way to Power’, begins the life, times, and adventures of one man—Richard Harris—a man with a common name but an uncommon nature. This book is purely fictional as to persons, institutions, times, and places. It is about a man, not a person, who is ruthlessly ambitious, a Catholic believer (but not too religious), and a true follower of Jong’s synchronicity philosophy. Power Seekers takes the reader into a world of ruthless people, envy, jealousy, ambition, treachery, hatred, love, disloyalty, and lust. It takes the reader into the wealth and power of the big end of town and their extensive influence on all political parties and to the inner thoughts of the real leader of Australia, the boss of all bosses. Therein lay the reader’s journey into the light. Yet Nagle does define a caring world of some parliamentarians as opposed to the opportunistic world of some other so-called politicians. There will be some who read Nagle’s book and may think this book is based upon them fully or in part or about their lives or the lives of real people as a character, but as Nagle says in the preface, this view is wrong, and if they still hold this view to be true, they are advised of Carley Simon’s song: you’re so vain if you think this book is about you.

This one person (oppssse I mean MAN) the author leaves School at 14 years of age in First Year High School and then is employed as a telegram boy and thereafter, a postman, mail sorter, stores branch junior, clerical assistant, clerk, union assistant secretary, TAFE teacher, taxation agent, Solicitor, Barrister, a state MP (1988-2001) and a teacher of Law at the UNSW. (2002-2006). In 1961 he has no real education to advance him in life; so he joins the ALP in 1961. In 1965-1966 he goes to night school and in 1966 passes the NSW Leaving Certificate; but cannot get into any University. At 24 he is admitted to Macquarie University and at 33 years, he leaves Macquarie University with a Batchelor of Arts with four majors; a Batchelor of Legal Studies; a Diploma of Labour Relation and the Law and finally a Diploma of Law. Becomes a Solicitor and is called to the Bar in 1981. In 1988; he is elected to the NSW Legislative Assembly for the state seat of Auburn and gains a dangerous reputation for fighting for the little folk to the annoyance of his own Labor Party’s Power Seekers who need to rely upon the Big End of Town for their political fortunes.