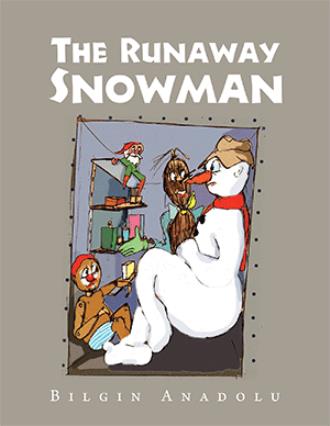 Chapter 2 Looking across to the direction where Windy had pointed to North, Snowball gave out a small nervous sigh and then looking back at Windy’s excited face, he said “Well Windy, I suppose we had better get going” Snowball, decided. Windy could not truly believe what he had just heard; the snowman had really agreed to take him along. Windy, being a lonely scarecrow with no friends to speak of, sought another conformation that he had really been accepted to join Snowball on his journey. Windy had never before asked for anything, in his life, also never had he been given anything apart from the bright yellow scarf he had around his skinny neck and the clothes he stood in. Here he was now, quite unexpectedly, on a strange cold wintery night embarking on going on an adventure with a snowman he had only just met moments before. But Something had drawn him on to make that impulsive decision; weather it was, he had so much to say and nobody to tell or weather the fear another opportunity may never arise again, Windy did not know. Something inside his straws and stick head told him this was the right thing to do and to follow his instinct. “Do you’s mean’s it, really mean’s it, that I’s can come with you, do you? “ “Well I suppose so, I did say so “said Snowball. Then he followed on by adding. “As far as the turning to California, which is where you want to go, isn’t that so?” Snowball looked into Windy’s face for this agreement. “Yes, oh yes, as far as the turnings to California” replied Windy, slightly awkwardly. Looking into Snowballs patient eyes, Windy thought, is this a dream, or could it really be real, and is it really happening. Am I really going to leave my field, surrounded by the hedges and the trees, I had watched grow all the years? “Well we should get going” Snowball gestured to Windy to start moving then he turned and began to walk away with a determined stride. Windy began to follow the snowman by plucking up his stumpy legs from the thick snow-covered ground, then focusing on one leg one leg to stride out followed the other as though walking came natural to him. “I’s coming” he said plucking out one of his legs from the ground then the other and stretching out the first leg to taking a step into the snow-covered field. First step, second step then all of a sudden, Windy was waist down in the ground. Snowball turned and looked in surprise at Windy’s face as he disappeared down into the snow. Deep in the ground up to his middle, looking up at Snowball with a shocked expression, as to how this could this have happened. “Help, I is sinking, help me Snowball” came a yell from the straw faced man as he struggled to get free from this very embarrassing predicament, he now found himself in. “What’s happened “Snowball called to Windy as he looked down at him sticking up half way in the ground. “It’s me feet, me feet, booties; booties, I’s need ‘em,” exclaimed the scarecrow. “Your feet, booties, whatever do you mean, Windy” Snowball enquired to the nature of the problem. “Pull me’s up, Snowball, just pull me’s up quickly” demanded Windy. Then with his two great arms Snowball placed them down under Windy’s arms and lifted the scarecrow up, out of his hole and laid him flat on the ground. “What are you trying to tell me, Windy? “Asked Snowball again Laying in the snow and looking down at his stumps, Windy, understood now why the farmer and his children all wore big green gum boots. It was for walking with, that must be why, he thought to himself. “I’s don’t have any booties on the end of me legs” said Windy pointing to the problem. “I needs me booties to get me’s to California” Windy moaned. Looking confused and bewildered, Snowball looked down at the upset scarecrow as he was trying to explain his predicament as best as he could, and desperate not to let this setback prevent him from going with the snowman. “But where are you going to get your booties from?” Snowball enquired sympathetically. “I is sure the farmer must have forgotten to put them’s on me legs. We needs to go to the big house at the end of the field, and find them’s.” Windy explained the solution to an unconvinced snowman. “But how”? Asked Snowball, wishing to know. “Well, you’s have to carry us,” he replied. “Carry you!” cried Snowball. “Well I’s can’t get to the farmers house alone, not without us sticking in the snow, now can I’s” Windy told Snowball as reasonably as he could and looking quite sad and pathetic on the floor. “What do you mean by carry you” repeated Snowball confused. “On yours back, you could carry me’s” pointed Windy up at Snowball’s back, and gave a little shy grin. Now it wasn’t in the snowman’s nature to go back on his word, for he was pure of heart, and if he had told the scarecrow they would leave together then he felt he should honor that promise no matter how annoying this strange creature was becoming. “Turns around, around”, instructed Windy to Snowball. He did so, reluctantly and slowly with an exasperating stare at Windy. Windy sprang onto his stumps then with a mighty leap he jumped onto the back of the snowman. “It’s the only ways, as I see it” continued Windy, trying to justifying himself. “Well if you say so, I suppose” huffed Snowball, not very impressed at the way this night was turning out. “Wow” Windy cried out with excitement as he urged the snowman to start moving. “Let’s us go then”

On a cold winter’s night amongst the many snowflakes that fell, one special Snowflake carry a gift of life, fell gently down from the sky, landing on the shoulder of a snowman and passing through its precious possession. It is for the Snowman to choose how to use this gift and who to share it with. The Snowman is faced with a choice, to accept his fate by staying on his spot or run away and see where his new life, takes him. He inspires a Scarecrow, a garden Gnome and a Puppet to also join him to escape and to seek the dreams they each yearn for. The journey they all embark on takes the reader with them, on an adventure, thwart with danger, into a world they don’t know, but through it all can they all really find what they are looking for.

Bilgin Anadolu, has put together this beautifully crafted first book, with characters that would be loved for a long very time. Supported by his beautiful wife Geraldine and his three children he thanks them for being so patient to see his first book published.