Raised By The World 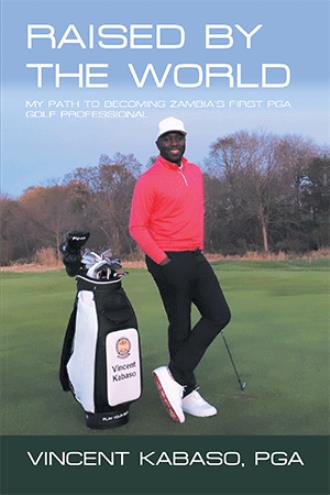 Raised By The World is an adventurous book about hope, perseverance, passion, and grit. It recounts Vincent’s passionate journey of self-discovery which began when his dad introduced him to golf. Until then, he was an uninspired boy hunting for birds and mice with prospects limited to the confines of this economically depressed rural Zambian town. When he emerged as a young golfing prodigy and decided to pursue a career in golf, it introduced him to a new world of opportunity, but at the same time, it began a pursuit of happiness journey whose questions don’t have immediate answers and every step forward breaks traditional norms in this developing African country with fewer than 5000 golfers and 20 golf courses. Learning invaluable life lessons while enduring unimaginable predicaments along the way, he shares his exhilarating journey culminating to the moment he earned membership to the Professional Golfers Association of America.

Raised by the World is a compelling, inspirational book from a leader who from humbled beginnings and against all odds has weathered storms with higher stakes than most people will ever encounter. Challenge, change and commitment flow from Raised by the World. This book is about Vincent Kabaso’s still unfolding story- both the heartaches he has faced, and the many accomplishments he has had—from his roots in Africa to his journey to America. A must-read book for anyone serious about learning some of the best traits possible and taking incredible risks to better their lives.
— Major General Steven J Hashem (US Army, Ret.)

I am so glad that Vincent has poured himself and his efforts into writing Raised by the World, it truly is an amazing story worth every minute of the read. From the first time we met back in 2013 on the campus of Methodist University, I knew this young man was something special. Vincent had already defied the odds of so many young people from Zambia and utilized golf as a way to escape the hardships his family endured. He wanted to see the world and make it a better place. During his time with us in the PGA Golf Management Program we saw his passion for the game and love for the Lord never waiver, despite what would be another major setback when losing his financial backing due to political and economic turmoil back home. His positive attitude and persistence were a true testament to the students in our program.
-Bob Bruns, PGA/Director
Methodist University PGA Golf Management Program

Vincent Kabaso is Zambia’s first elected PGA Golf Professional. His inspiring story has been featured by PGA magazine, Golf Digest, and he was recognized in the United States senate. In 2020, he was elected to the PGA Leadership Development Program and was inducted in the Zambia Golf Union Hall of Fame.

Vincent Kabaso is one of the great people I have had the pleasure to meet in the game of golf. His love for the game is obvious and proven in this surreal life story. With all the negativity in the world, read this book and enjoy the hope he shares and the great potential and possibilities that are there for all of us.
- Sean Foley
PGA Tour Instructor