The Squirrels and Lions

How Honest Communication Sealed Their Friendship 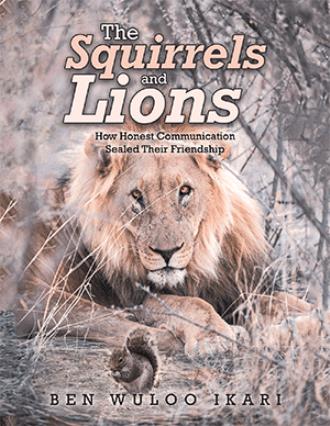 One-day Little Squirrel's mother, Kindness went to the farm. She took Little Squirrel her 13-year-old daughter called Humble with her. Respect, who is her father and also known as Skillful, his nickname, was to watch her. He couldn’t return as scheduled. As a result, Kindness took her to the farm. As Kindness arrived at her farm and settled down she told Humble to sit under a tree used as rest place. She did as her mother said. While Kindness started to weed the grass Humble walked back and forth from the resting place to the middle of the farm where her mother was working. Her mother worked for about two hours, drank water occasionally. Then Humble told her she wanted to use the bathroom or ease herself. Her mother instructed her to walk to the end of the farm so she did and returned upon using the bathroom. The location wasn’t far thus within the mother’s view. In two hours and thirty minutes Humble was hungry. Her mother quickly put together some food. She ate and rested then began to play in an already weeded and cleared area. About an hour later Humble walked toward her mother and said, “I’m tired and feeling sleepy.” Her mother fixed a make-shift bed for her to lie on. Humble was already sleeping sitting down as her mother was making the space for her to sleep. As Humble slept her mother proceeded to work. And as work progressed and Humble was fast asleep she ate some food herself and rested for 20 minutes. She went back to work thereafter. Two more hours came and she decided to call it a day and cleaned things up while her daughter slept. Once things were put where they belonged she began to fetch firewood at the farm’s boundary. While fetching firewood she also harvested some vegetables. Thirty minutes later she heard her daughter crying. Humble was already up and scared. Beside her was a 14-year-old Lioness by the name Goodness. She's trying to play with her so told her not to cry. Goodness asked Humble if they can be friends. Humble, terrified by the story her mother and father told her about Lions yelled on top of her voice that her mother heard her. The Lioness or Little Lion insisted, “Please, don't be scared nor judge me. We can be friends. Lions are friendly, and I can assure you we can be good friends; my family will like you too,” she declared with infectious smile. She said Lions aren’t harmful, but are strong and brave animals. And subsequently told her that they struggle, work hard to find food. Finding food to survive is usually a trying thing for Lions and other such carnivorous animals that fight and kill to eat or just eat other animals. “We’d and have fought, wrestled down other animals that could be weaker and also stronger even bigger than us to eat,” she stated. Goodness said struggling and killing other animals doesn’t mean the Lions are extremely dangerous and harmful. She said fighting to eat is the way nature design and destine them to feed and survive, and wished there was an alternative method. She continued, saying, “We’re very friendly and charming. Sometimes we protect other smaller animals and also fight for and protect bigger animals too.” Generally, Lions are very strong and fierce enough as we know. They’re so fierce that they inherently don’t allow other animals defeat them in fights, and when struggling to kill other animals and use for food. Yet Lions could be defeated depending on the animal. Human beings are also terrified by the presence and fierceness of Lions or Lionesses. Notwithstanding Goodness said, they’re friendly to all when not threatened and not searching for food. She even said they're some of the coolest animals in the kingdom. And she believed the fear human beings and other animals have when Lions and Lionesses come to mind is psychological, especially triggered by their appearance or tough and devouring posture. That it’s what’s perceived and also known, “And I can understand,” she said. 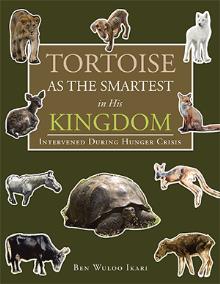 Tortoise as The Smartest in His Kingdom
Ben Wuloo Ikari
£10.95

This book is about the importance of honesty and trust. It is about strategic and competent communication, which also comes with suspending judgment before the facts. With this kind of communication, which could be ritualized or relatable, the squirrels were able to be friends with the lions. Although the parent squirrels doubted the honesty and sincerity of the lion when he told the little squirrel and her mother that he will not only protect them for the sake of his daughter who wanted to be friends with the little squirrel so bad when they met at her mother’s farm, but he will give them food they can eat for one year. That is, should the squirrels agree to visit the lions’ home as the younger lioness requested. The squirrels were scared, given the lions’ carnivorous history as designed by nature. With the openness of their young daughter, her ability to listen, and the honesty of the younger lion, they killed their fear, opened up to the lions, and visited their home—a gesture that was returned by the lions. The lions kept their promise and stayed honest. Therefore, if these animals could understand the importance/benefit of honesty, trust, and keeping promises, then human beings can do better. We have done better, but we need to do more to become best and succeed in our friendships and relationships as individuals and with governments and corporations, governments to governments, or between nations, etc. Even as we strive to become better and best in our friendships and relationships, we must not be scared or worried about failing in the process or making mistakes. It is all right to make mistakes, so the fear of perfection or imperfection should not deter us from working hard and failing to become best. Like good and bad or success and failure, mistake is part of life. In short, it is said to be the raw material of success, but only if and when we are determined and committed to succeeding—and not make deliberate mistakes that could be dangerous and destructive.