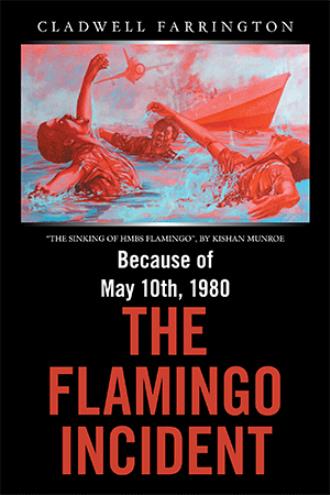 THE ATTACK OF ALL ATTACKS I was still in the Radio room waiting for a reply from Base. Spinning around in the chair I looked at my watch – it was about 6:45 pm. Before I could spin again there was a loud sound and a “solid hit” that shook the vessel and the shelves of radios came tumbling down on top of me. This was followed by fire, smoke, and noise. Everything in the room where I was, was broken and my left shoulder was injured. At that moment, only one thing came to my mind and that was to get out and get out quickly. The inside was a total wreck and I could not figure out why the men were trying to get inside instead of out. “Hey, you'll go back out!” I shouted as I made my frantic way to the outside. However, the scene on the outside mirrored the inside – there was fire and smoke there too. But there was also gunfire. Rapid machine gunfire fell all around. The ship’s metal was melting and the vessel continued to fall apart. The loud bang had been a rocket hit. The men were just standing around not sure of where to go, what to do when to do it or even how to do it. Everyone was stunned. Shocked. “Lord, help us all,” I cried out. I saw Tucker putting on a life jacket and I wasted no time in tearing off my boots. Before anyone could say, “Jack Robinson,” I was in the water and swimming at my fastest pace. I was quite a distance ahead of everyone because I was the first person to leave the ship. At this time, the jets kept firing at the FLAMINGO putting a very large hole into it. They were Cuban military MiG fighter jets. They swooped down to us in the water firing bullets at the same time. Every time I saw them coming toward me, I dove down and stayed as long as my breath would keep me. After a while I got tired. If the jets had come my way again, I think I would have been shot, because I would have been too tired to go under again. I came up to one of the Cuban vessels we had arrested which was some 200 yards away from the FLAMINGO and climbed aboard. Neely who had been posted on the detained craft got into the vessel’s rubber dinghy and began rescuing the other men in the water. From where I was, I could see the FLAMINGO. I was sure that the crew on the bridge section with all of the navigational equipment were dead because the bridge was in flames. As I watched, I saw someone jump into the water but at that distance, I could not be sure who the person was. I later learned that the person had been Commander Rolle. He had attempted to put out the fire but it became too big for him to handle. The jets had gone now but a Cuban military helicopter remained to hover in the area, seeming to wait for the ship to sink. It all happened so fast – the attack, the swim, the sinking – because in what felt like minutes, the H.M.B.S. FLAMINGO, went down to the bottom of the ocean. As it was going we were still able to stand up and salute it.

The book, Because of May 10th, 1980; The Flamingo Incident is a detailed, personal account of the events leading up to, during and after the May 10th, 1980 bombing of the Bahamian military vessel the HMBS Flamingo. As a survivor of the attack, Farrington says that the book means a great deal to him. He wrote it a little at a time and sometimes cried as he recalled the events, and sometimes laughed remembering the good times he shared with his fellow crew members. The book was written so that everyone, especially the families of the fallen men and their children would know and appreciate the sacrifice that was made for the nation.