Development in Unity Volume One 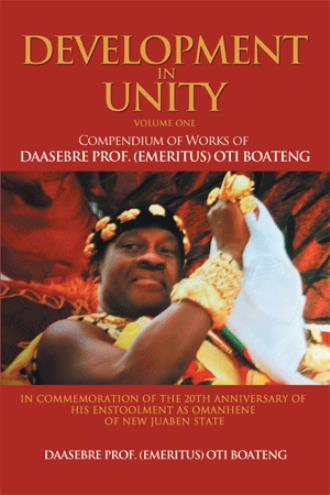 “Development in Unity: A Compendium of Works of Daasebre Prof. (Emeritus) Oti Boateng, Volume1” is a compilation of research works, published articles, speeches, seminar presentations, addresses, and radio broadcasts written by the author over the past 40 years.

In these articles, the author, a distinguished statistician, a university don, a UN commissioner, a Vice-Chancellor of the World Academy of Letters, and a traditional ruler, combines his rich scholarly background and his deep understanding of complex traditional, national and international issues in addressing some challenges that face humankind.

The Akwantukese Festival, was instituted in 1997 by the Omanhene, Chiefs, and People of New Juaben to commemorate the fifth anniversary of Daasebre Professor (Emeritus) Oti Boateng’s enstoolment as Omanhene of New Juaben in the Eastern Region of Ghana. The Festival commemorates the migration of the Juabens and their allies from Asante to the Eastern Region of Ghana in the 1870s. The basic goal of Akwantukese is to promote the socio-economic progress of the people through education, traditions, and customs. It further serves as a tourist attraction for people all over the world. Akwantukese also reinforces the ancestral unity between the citizens of Asante and Jew Juaben for peaceful co-existence.

The articles in this first volume have been carefully selected to emphasize these ideals thereby creating a gift for posterity.

As you enjoy these collections look out for the next volume in the series which is scheduled to come out very soon.

Daasebre Prof. (Emeritus) Oti Boateng, a Traditional Ruler, United Nations Commissioner, Professional Statistician, and distinguished Research Scholar, is amazingly a walking encyclopaedia possessing insightful and analytical knowledge on virtually every issue of our time. He has to his credit one of the longest listing of scholarly and published works spanning nearly half a century.

When some nine months ago, he thankfully obliged with the proposal to produce a set of compendium of his works, we were not disappointed, to say the least. The initial weekly meetings in his house were very rewarding indeed. He was forthcoming with an extensive array of rich analytical material that can fill several volumes. This publication represents the first of three volumes of Compendiums of the Works of Daasebre, dubbed “Development in Unity.” The significance of this “authentic creation,” no doubt, lies in how it positively impacts the shaping and reshaping of our desired way of life in the face of an increasingly complex development challenges.

It is our firm belief that our national celebrities, academic giants, and distinguished professionals in their chosen fields, must be able to share knowledge and make strong contribution to the enrichment of our culture and most enduring traditions. This has become necessary especially because of certain international imperatives and competing trends in our global village that demand that we remain current while at the same time identify with our cultural traditions. Daasebre’s Compendium of Works, we equally believe, effectively situates us in the present era while encouraging us to take much pride in our traditional values.

The selected Works of Daasebre published in this Compendium are grouped into nine distinctive sections providing in-depth material and analyses for the general reader as well as a reference base for the researcher and others.