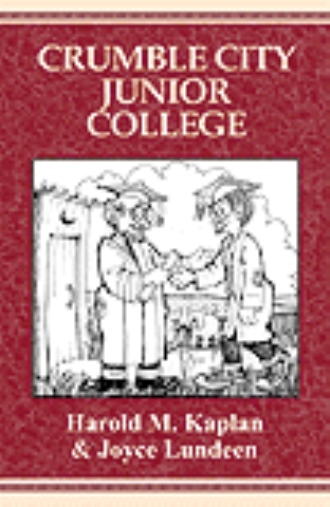 Crumble City Junior College is a story with a now outdated title about a mythical college situated in an almost never-never land that existed in the era of In loco parentis, prior to the Community College and having intrinsic powers of operation that could only be granted in small part currently. All written herein is very highly exaggerated, but the local happenings are understandable in the experience of teachers who have lived many years within the semi-purified academic walls.

The ever-recurring stupidity  of ludicrous events, at the level of all persons in the academic scene is emphasized in this book a bit much since it brings out sharply the personal weaknesses and prejudices of people at any historical time and how they work and live in the rarefied world of academia.

The principle potentate at this Junior College is its President and how he uses his given power, both sagely and otherwise. You may get to like him, at least occasionally. We may have over-ridiculed the Health Service but this is not unusual even now. It will get lost in the crowd when Managed Care gets going.

There is a song, apparently originating in an Ivy league College that includes a verse called,Where Oh Where is the Funny Funny Faculty? We have addressed this scenario in our remarks about faculty and our report is biased because we have been around too long. However, the view is not entirely incorrect that the faculty is the facultys worst enemy.

The antics of the students may appear to be highly exaggerated in our account, but students in all generations have a built-in capacity for repetitive mischief. This is entirely expected for their still adolescent outlook and their release from parental constrictions. For the most part, they tend to reform after graduation as the realities of the world engulf them. I tend to like the teachers who enjoy them as they are, but I have not treated well those who have stayed crocked on the same wavelength. All concerned including the reader should be sympathetic.

We have not failed to note that the only thing serene within and without the hallowed walls is the well-mowed grass around the buildings. The College is a microcosm of the universe of all people and especially those in the locale in which the College is located. With all its faults, it is a healthy place to be in and grow in knowledge and wisdom.

Dr. Kaplan is Visiting Professor in the School of Medicine at Southern Illinois University. He is author or coauthor of 200 scientific publications, including 10 books in Physiology. Joyce Lundeen is past editor of a monthly Mensa journal in Oklahoma. She now works in advertising.