Book One of the Echlesia Trilogy

by Ray A. Hansen 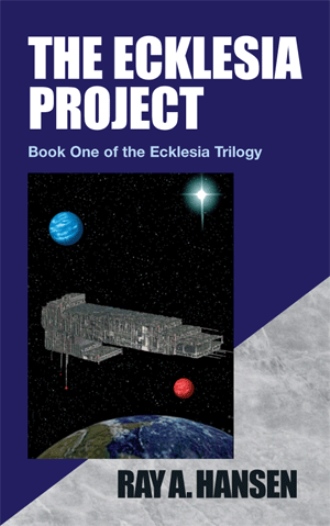 Envision a universe of mammoth space cities and alien worlds inhabited by unique creatures engaged in a conflict against the most evil and formidable power imaginable.  Now imagine this universe as the setting for a series of novels depicting the issues faced by the Christian church.  Such is the world of The Ecklesia Trilogy, a series of Christian science fiction novels by Ray Hansen.

The first novel in the series, entitled The Ecklesia Project, introduces the reader to a group of people known as the Ecklesians.  In a race against time, the Ecklesians struggle to finish their massive, two-thousand year-old star ship (the Ecklesia) as the forces of darkness begin to envelop their home planet, Terea.   Commanded by Admiral Paul Bishop, a man of high charisma who tries desperately to hide his own sense of insecurity, the Ecklesians must deal with a terrorist from among their own ranks.  Meanwhile, the dark forces of Lord Nekros grow even nearer as they begin to secretly infiltrate all elements of  Terean life . . . including the government!

The Ecklesia Project is a science fiction novel that addresses a variety of issues faced by the Christian Church.  In this particular book, issues such as the difficulties of personal evangelism, spiritual warfare and Christianity versus a secular world view are dealt with in allegorical style.

"Ray has done an outstanding job of using his story-telling ability to paint a vivid picture of the role of the church in our world today. If you like good science fiction and would like to walk away with something to think about, this book is a must read! Its a page turner from beginning to end."

With a background in theology and communications, Ray Hansen has endeavored in The Ecklesia Trilogy to produce one of the few science fiction epics on the market today that comes from a completely Christian perspective.