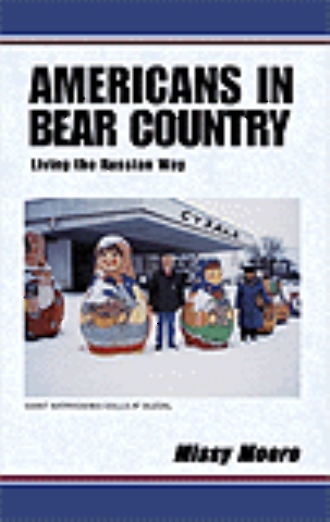 My husband and I lived in a small town in western Russia for fifteen months, in 1992 and 1993, and I have written a book based on our daily living adventures.  We returned again in the summer of 1999.  Upon our return I wrote an epilogue which forms the last chapter of this book.

Living in the Russian hinterlands for a year and a half was a fascinating and discouraging experience for my corporate executive husband and myself.  He was there to implement a Joint Venture agreement between a small Russian company in Pavlovo, in the Nizhny Novgorod region, and a large company in the United States.  The purpose was to try and bring the Russian factory and management up to western standards so they could compete on the world market.

I maintained my sanity amidst poor living conditions, scarce food, and the two long winters by keeping a daily journal.  Upon our return I wrote this book based on our daily living adventures:  the chicken store, the black radish cold remedy, the bread store giving “change” in bread, a personal attack by gypsy children in Moscow...

The book is organized into chapters which would generally be considered “aspects of daily living:” my struggle to find food, our poor housing conditions, frightening personal episodes, the half-existent communication system, being entertained in Russian homes, my struggle with boredom and isolation (no foreigners lived in our town of 70,000 people until one Peace Corps volunteer arrived about eight months after we did).

The difficulties and problems were exacerbated by the fact that we are an educated, affluent couple in our 60s.  We had hoped to make some contribution to improving Russian life. A forlorn hope. My husband’s experience with the joint venture was even more discouraging than my struggle with daily living. He has also written a chapter of the book.

In the epilogue I describe both my continuing frustrations with the difficult life the people of Pavlovo continue to be faced with and the improvements we observed.  There are some positive changes that are being made in that city that give some hope that these Russians that we came to know and to love so well will not always suffer such deprivations.  The young people are the hope of their nation.   The following direct quotations are the opinions of some of the readers of my manuscript:

“If you’ve ever looked at photos of Russian women stoically waiting in lines and wondered what it would be like to share their fate, travel with Missy Moore to Russia via her memoir ‘Americans in Bear Country.’    Russia, outside of Moscow, suffers from third world problems: inadequate roads, water supply, availability of necessities.  The warmth of Russian hospitality softened these hardships.  You will struggle and suffer with the Moores and wonder at their perseverance.”

“As a management consultant active in the former Soviet Union, I have seen with my own eyes much of what Ms. Moore describes in her book. The most noticeable characteristic of the New Russia, as I see it,  is how much of the old USSR still remains. Ms. Moore has a keen eye for the stepping stones and stumbling blocks Russia has encountered in its headlong jump from Communism to a murky New World characterized by sloth, corruption, and drunkenness. She neatly balances her own experiences and perspective with an appreciation of the larger challenges faced by her ‘adopted’ country.

This book would be a welcome addition to my library, and an invaluable primer for any businessperson or visitor hoping to navigate the minefield of Russia today. It is an invaluable resource for anyone trying to appreciate the Herculean task of transforming the sodden, cy

Missy Moore received a B.A. degree from Wellesley College in 1960. She is a writer and a retired college professor of finance. She has also held several positions in the financial services industry. In 1992 and 1993 Missy and her husband lived in Pavlovo, Russia, 250 miles East of Moscow. “If you’ve ever looked at photos of Russian women stoically waiting in lines and wondered what it would be like to share their fate, travel with Missy Moore to Russia via her memoir ‘Americans in Bear Country.’ Russia, outside of Moscow, suffers from third world problems: inadequate roads, water supply, availability of necessities. The warmth of Russian hospitality softened these hardships. You will struggle and suffer with the Moores and wonder at their perseverance.” ______Susan Robertson, EFL instructor at Hillsdale College and advisor of Foreign students. “I’ve never read anything that has given me a better understanding of the frustrations of daily life in Russia. This book should be required reading for anyone who wants to understand why changing the communist system to a free market economy is so terribly difficult.” _____Walter Schray, executive of Jonesville Paper Tube Co., , editor of “The Squeak,” and world traveler.