An Immigrant's Struggle to Happiness 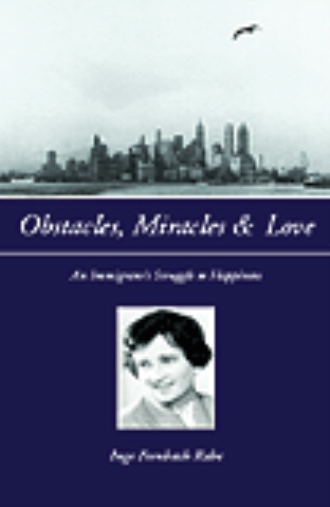 Inge Fernbach Rabe was born in Germany in 1924, nine years before Adolf Hitler’s rise to power. Her early childhood years were marked with love, laughter, and happiness.

Early in 1933, her innocent and carefree world began to crumble. It began slowly, with name-calling. At first she didn’t know the meaning of the word “Jew.” Although her grandfather had been Jewish, Inge had been raised in a Christian family. Under the German laws of the time, she was considered half-Jewish, and therefore “racially impure.” Her family bore the full brunt of Nazi economic sanctions when her Papa’s business was ruined. Soon she was experiencing the pain of rejection when many of her friends were no longer allowed to play with her and the disappointment of being deprived of educational opportunities.

Inge and her family endured difficulties that had previously been unthinkable. She was sustained through tragic circumstances by her loving mother and a deep faith in God as her Heavenly Father.

She rejoiced when Allied forces finally liberated the people of Germany, and looked forward to building a new life. After struggling for ten years in post-war Germany, she decided to immigrate to the United States.

Her new adventure began on April 4, 1955. As an immigrant she had to master a new language, learn new customs, earn a living, and catch up on her education! Although she often found herself in difficult circumstances, the kindness of the American people kept her going.

Years later, happily married and with a son and daughter, she looked back on her struggles and thanked God for seeing her through to better times.

Happiness doesn’t last forever, though. Her husband passed away unexpectedly, leaving her to care for two young children. Once again she would have to rely on faith and determination to survive. And once again she would discover that God’s blessings do arrive in the midst of hardship!

Inge is retired now, and fills her days with gardening and writing.

Inge Fernbach Rabe was born in Pirna, Germany in 1924. Although raised in a Christian family, her Jewish descent made her a target of Nazi persecution. Her deep faith in God as her Heavenly Father sustained her through years of hardship. In 1955, Inge began a new chapter in her life when she immigrated to the United States. Later she married and raised a family, again relying on God to get her through the tough times. She is retired now and fills her days with gardening and writing.