by translated by Dennis J. Carlile 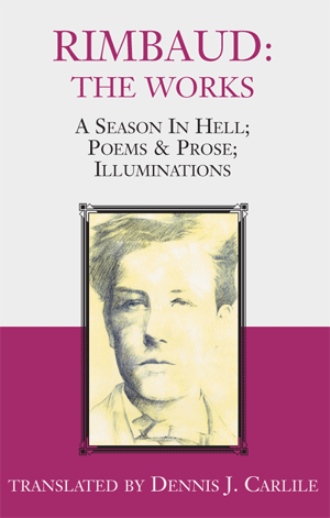 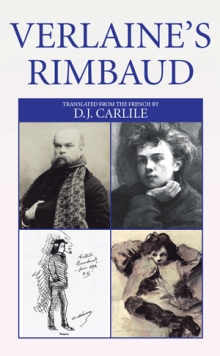 CHARLES NICHOLL, author of SOMEBODY ELSE: ARTHUR RIMBAUD IN AFRICA 1880-91 has written of Dennis J. Carlile's translation of RIMBAUD:THE WORKS.

"These are the best renditions of Rimbaud in English since Wallace Fowlie's nearly forty years ago, and many of them surpass that high standard. These poems have been wrestled with, which is the very least they demand, and successfully brought back home. Carlile gets the difficult switches and swoops of tone mostly right, and the linguistic detail is impressive-- for 'un voix etraignait mon coeur gele' you can't get much better than 'a voice would hobble my frostbitten heart'."

This new translation of Rimbaud is the first in English to include the fragments and a "Found Poem" in English. Notes and commentary along with a life-chronology and "selected further media" assist the reader in delving into these darkly brilliant visions.

RIMBAUD: THE WORKS is the first new English version of this poet’s work in 25 years. It contains all of his extant work from 1869 to 1875.

The book is laid out in four parts. PART ONE contains "A Season In Hell" (1873) along with Delmore Schwartz’s perceptive introduction (out of print for over half a century). PART TWO contains all the poetry and prose pieces composed between 1869 and 1875, including THE DRUNKEN BOAT, the "Album Zutique" and the fragments called “Bribes” first published by Gallimard in 1954. PART THREE consists of "Illuminations" (c. 1872–74) with a brief preface culled from Enid Starkie´s ARTHUR RIMBAUD. "Illuminations" is lineated according to the author’s manuscript (published in facsimile with facing print text by Editions Bibliothèque de l’Image 1998) and the order of the text is that of the manuscript.

A set of notes for each section defines obscure geographic, linguistic, historical, and mythological allusions found in the text.

[Aside from "Illuminations," which is based on the manuscript copy, the French texts utilized for the translation were those of Gallimard (ed. Forestier) and Flammarion (ed. Steinmetz).]

Cover portrait and frontispiece of Rimbaud plus three illustrations by Alexia Montibon.

Arthur Rimbaud (1854–1891), “a prodigious and prodigal adolescent,” composed his entire body of work between the ages of 15 and 19. He took poetry “beyond literature.” The latter half of his life was spent in Africa as a trader in coffee,hides, ivory, and guns. He died in Marseilles at age 37,on his way back to Africa. Translator Dennis J. Carlile (b. 1946) first encountered the poetry of Rimbaud at a summer concert in 1965 or 1966 where tenor Charles Bressler sang Benjamin Britten’s Les Illuminations. Mr. Carlile is the author of several plays, among them Carved In the Fog, Delmore At The Last, and JUMP! The Madness of Nijinsky, written for Alexander Jones.