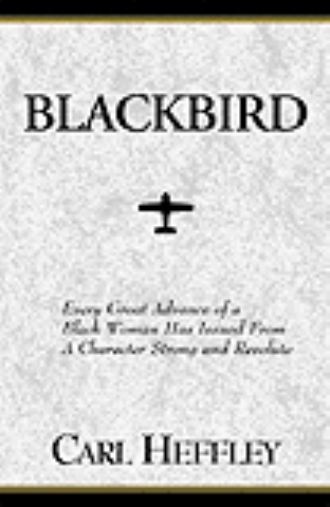 In the early days of flight, a strong bias against women wanting to fly existed. Flying the newly emerging airplane was considered mans work and women were deemed unfit, prone to panic, and not strong enough. It was a white, male, dominated field and was kept that way until a handful of spirited women broke down the female bias and proved through their exploits that it was not impossible for women to master the mechanics of the flying machines. But, for one woman, the task of becoming a flyer was doubly difficult. for she was black.

The following story is purely fictional. Its only similarity to the life and times of Bessie Coleman, the first black woman licensed to fly, is the idea of an African American woman wanting to fly and through perserverence and determination, overcoming severe odds to achieve that goal. The story is completely fictional and any resemblence to persons living or dead, is purely coincidental.

Carl Heffley is a retired foreign service officer who served over twenty years with the State Departments Agency for International Development. Born in California in 1929, he graduated from Shafter High School in 1946 and immediately joined the Marine Corps. Following military service, he enrolled in a flying school and received his private pilots license in 1949. Married to his high school sweetheart, their one daughter has provided them with two grandchildren. An artistic family, Mrs. Heffley is an accomplished Oriental brush painter who studied with notable Oriental artists in Korea, Vietnam, and with Professor I-Hsuing Ju, professor of art at Washington and Lee University in Virginia. She currently teaches Oriental brush painting for the Artists Studio Association in Lincoln City, Oregon. Carl is a part time wood sculptor and both are avid golfers.

Prior to his foreign service work, Carl was an urban planner who worked at both city, county, and federal levels. A member of the American Institute of Certified Planners, he attended Columbia University in New York, and the University of Connecticut in New Haven. Additional credits in urban planning were obtained from the Institute for Training in Municipal Administration in Chicago and in Municipal Public Relations from Clark College in Vancouver, Wash. From 1958 to 1968, Carl was the Director of Planning for the Town of Darien, Conn., Washington County, Oregon, and the City of Vancouver, Wash.

Following a brief stint as Regional Planning Requirements Officer with the Office of Housing and Urban Development (HUD) in San Francisco, Carl was hired by the Peace Corps as the Regional Representative of the Peace Corps program in the Southern Philippines. After two and one half years with the Peace Corps, Mr. Heffley was hired by the State Departments Agency for International Development to serve as an advisor to City Governments in Vietnam. He was posted in Danang for two and one half years and in Saigon for two years, at the height of the war. Following a tour in Washington, D.C. after Vietnam, he was posted to South Korea to assist that Governments program in the development of low cost housing.

Following a tour in Washington after three years in Korea, Mr. Heffley retired to Cambria, a small community on the central coast in California, where he started writing fiction. The absence of a golf course in Cambria prompted his move to the Oregon Coast in 1992, into a home that is located only steps away from the 9th tee of one of Oregon’s finest golf courses. Here, he resumed his fictional writing and has completed 2 novels, “Blackbird” and another ‘titled, “The Last Righteous Man.” Also, a small effort entitled “In Other Words,” an essay on a compilation of bumper stickers that he has collected over the years. He is currently working on a series of short stories and articles on various topics of interest, tentatively ‘titled “Cautionary Tales,” that he hopes to compile into book length form.