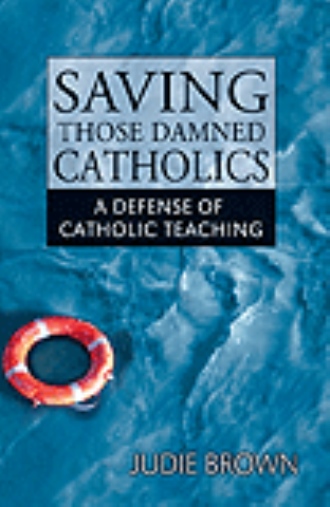 Saving Those Damned Catholics chronicles the reasons why the current mess within the Catholic Church is not something that should surprise anyone, whether Catholic, Protestant, or just curious. After all, as the story unfolds you will learn how a bureaucracy has replaced individual commitment; and how politics has become far too appealing to the majority of Catholic bishops. It is no surprise that Americans scoff at Catholic teachings on birth control, abortion and euthanasia. The statistics tell the tale: most Catholics don’t know what the Church teaches on these matters of life and death, and if they do, they choose to disagree and – ho-hum – the hierarchy moves on.

Saving Those Damned Catholics outlines the logic behind the most controversial teachings in the Church today, and exposes the arguments put forth by priests and bishops who clearly do not agree with some of these teachings themselves. Astounding as it may seem, there are reasons why federal funding has become more important than protecting innocent life; why popularity among the most liberal of politicians has trumped Pope Benedict XVI’s call to be good shepherds and, indeed, to be counter-cultural. There are reasons why homosexuals are still in the seminaries; and there are reasons why the vast majority of Catholics use birth control and condone abortion.

Ever wonder why people like Bill O’Reilly, Ted Kennedy and others in public life get away with distorting Catholic teaching? Scoffing at the truth? Taking it upon themselves to “correct” the Pope on national television? This book will give you a bird’s eye view into what is being said and what is not being done to set the record straight.

As Judie Brown put this book together she was able to interview several Catholic priests, including two bishops. One of the most interesting comments she heard is that the United States Conference of Catholic Bishops is not only a major part of the problem these days, but is an entity that should be deconstructed – abolished, as one priest put it. The bureaucracy has become synonymous with doing nothing to rock the proverbial political boat. But you’ll just have to read the book to learn more.

In summary, Saving Those Damned Catholics exposes the warts on the underbelly of the Catholic leadership in America today, and it is not a pretty picture. Too many among them are caught up in a twisted vision of what it takes to effectively lead Catholics. There is too much moral relativism and too little desire to say what is right, especially when doing so will bring down the wrath of the media and maybe even a few politicians.

Regardless of your opinion about Catholics and their Church, don’t miss the chance to read one woman’s account of history – a history that continues to unfold before our eyes.

“Judie Brown’s work fills a void screaming for attention – the persistent relentless assault on Catholic orthodoxy by dissidents attempting to reshape the church in their image. She spells it out and names the names without violating Christian charity. She deserves a wide hearing.”
- Ray Kerrison, New York Post columnist

Judie Brown has never been one to sit back and let the devil have his way. Her great new work, Saving Those Damned Catholics, tells it like it is. I thank Judie for her forthright analysis of the state of the Church. She is not just telling us what is wrong – she is giving us our marching orders.
- Father Tom Euteneuer, President, Human Life International

We can always count on Judie Brown and American Life League to keep up with the shenanigans of the so-called “Catholic” leaders. Judie’s call for authentic leadership from the nation’s bishops and priests is key to rejuvenating the Catholic Church’s role in American life.
- Joe Scheidler, Director, Pro-Life Action League

With wit, insight and fea

President and co-founder of American Life League, Judie Brown is one of the most prolific contemporary Catholic writers, providing commentary and analysis from the perspective of Church doctrine. Saving Those Damned Catholics is her third book. Named as one of the Top 100 Catholics of the Twentieth Century, Judie is serving her second five-year term as a member of the Pontifical Academy of Life. Her expertise in defending pro-life arguments within the framework of Catholic teaching is well-known and may be read at Eternal Word Television Network’s website forum, and elsewhere. As the Daily Catholic put it: “God has chosen Judie for this unimaginably difficult assignment.”