as passed down through the oral tradition 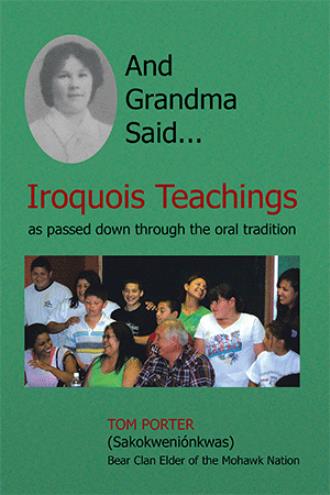 The Iroquois culture and traditional Longhouse spirituality has a universal appeal, a ring of truth to it that resonates not only with other indigenous people, but also with non-Native people searching for their own spiritual roots.

Raised in the home of a grandmother who spoke only Mohawk, Sakokweniónkwas (Tom Porter) was asked from a young age, to translate for his elders. After such intensive exposure to his grandparents’ generation, he is able to recall in vivid detail, the stories and ceremonies of a culture hovering on the brink of extinction. After devoting most of his adult life to revitalizing the culture and language of his people, Tom finally records here, the teachings of a generation of elders who have been gone for more than twenty years.

Beginning with an introduction about why he is only now beginning to write all this down, he works his way chronologically through the major events embedded in Iroquois oral history and ceremony, from the story of creation, to the beginnings of the clan system, to the four most sacred rituals, to the beginnings of democracy, brought to his people by the prophet and statesman his people refer to as the Peacemaker. Interspersed with these teachings, Tom tells us in sometimes hilarious, sometimes tragic detail, the effect of colonization on his commitment to those teachings.

Like a braid, the book weaves back and forth between these major teachings, and briefer teachings on topics such as pregnancy, child-rearing and Indian tobacco, weaving the political with the spiritual. Through his recollections of “Grandma,” and what she said, we also get an inside view of the life of a Mohawk man, and his struggles. Sometimes articulate and at other times inventive with his second language of English, Tom takes us on the journey with him, asking us to trade eyes, by “erasing the blackboard” to see if we “can understand what a Mohawk sees, feels, is happy about and is sad about.”

Chapter sections and headings include: The Opening Address, Colonialism, Creation Story, Language in 3D, The Clan System, Trading Eyes, Funerals and Contradictions, A Language Dilemma, The Fog, Where We’ve Settled, The Four Sacred Rituals, Atenaha: the Seed Game, The Four Sacred Beings, Three Souls or Spirits and Ohkí:we, Weddings, Pregnancies, A Spiritual Ladder, Child Rearing Methods, The Great Law of Peace, Some Notes on Tobacco and Other Medicine, The Leadership, Casinos, Prayer?, The Future and The Closing Address. There is also an appendix of interviews with Tom’s children, entitled: What Grandma’s Great-Grandchildren Learned.

Written as it is, by someone raised predominantly by a grandmother, it contains teachings which might otherwise be lost. The Iroquois culture and traditional Longhouse spirituality (of which Mohawk is one of five – and more recently six - nations) has a universal appeal, a ring of truth to it that resonates not only with other indigenous people, but also with non-Native people searching for their own spiritual roots. Due to the suppression of indigenous spirituality and culture, not only in Iroquois country, but across North America, many are searching to recover the remnants of what has been lost.

This book makes a significant contribution to doing that, having been written by one of the original leaders of the revitalization movement. During the 1960s and 1970s this Mohawk Bear Clan Elder traveled extensively across North America with a group called the White Roots of Peace, a group which has been credited as the original stimulus for the growing trend to return to traditional ways on this continent.