A Chat About “TRUST” 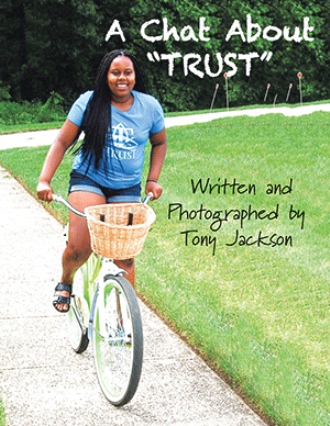 “TRUST?” What an unusual topic for Skyy to agree to discuss with her friends, right? But everyone of her friends agreed that it wasn’t such a weird idea after all. They all gave Skyy their “We agree phrase”, by saying, “Cool, I like it!” Once Skyy started the discussion and the others saw that this subject could be just as fun and interesting as any other, they all joined in and began to discuss the issue of “Trust”. Take the journey with these cool and intelligent kids and find out what they have to say about their understanding of “Trust".

Or Go To www.Xlibris.com

Let's meet Tony Jackson. He is a minister of music,a professional recording artist,an entrepreneur and most importantly he says,"A family man".

Tony engaged himself in music at a very early age. He is a self taught musician and learned to play drums,keyboards and organ. His favorite musical genre is gospel,where he honed his skills in various local churches. Tony released his first National solo project in 2007 entitled "Joy In the City". His second project "You Are to Me" was released in 2011. Both projects can be found online under "The Tony Jackson Project". Tony is currently working on his newest gospel project due to be released soon,"Everything Your Way".

In 2014,Tony and his wife Keisha launched an apparel and accessory brand called TRUST by Tony & Keisha. TRUST is a Christian Brand that spreads the awareness of Jesus Christ through its logo,apparel and accessories. You can find TRUST at WWW.TRUSTTK.COM.

Tony's greatest love is his family. He is married to Lakeisha Jackson and has 3 sons,Ryan,Tyler,Camry and a daughter,Skyy. Tony says,"My family brings me the greatest joy and is what ultimately drives me to be the best I can be."

Lastly,Tony has always wanted to become an author. He is so excited to have the opportunity to write this book and hopes to continue writing for years to come. Tony says,"My prayer is that this book would be a vessel to help youth and all who read it across the world,understand the value and importance of "TRUST".