How to Handle Risk!

Adapted from the Simplest, Most Powerful Tool in GE 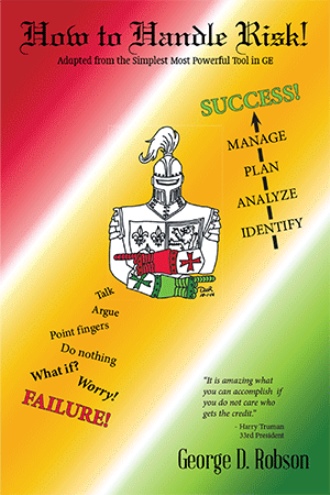 Who can use this? When I began this project, I was primarily targeting business leaders and project managers. However, as I progressed, I realized I was using day-to-day examples to illustrate how it works. Consequently, the application of this process is much broader than just the business arena. Therefore, I had to ensure that I present it appropriately. We all face daily challenges, issues, and risks that create some level of uneasiness or worry. How we handle our issues can mean the difference between success and failure. This simple process can help address everyday issues and personal risks with a greater level of confidence. No matter if we are in a business or personal environment, it can help make objective-based decisions and avoid unhelpful and stressful subjective discussions. It’s a simple tool for the masses! Let’s talk about risk! When the subject of risk comes up in our house, my wife is quick to tell me that I’m not a risk-taker. Of course, I counter that taking a risk depends on several things. It’s all about how I handle risks. I will take a risk if the probability of something going wrong is low and the impact is also low! So when I talk about risk, I include two factors—probability and impact—which must be characterized objectively and in terms that can be quantified. This book will arm you with a process that is simple to understand and apply. This form of risk management does not have complex formulas and financial forecast models and is not confusing. It is common sense harnessed in a simple process! How most of us handle risk: 1. We see issues. 2. We talk about them. 3. We avoid doing anything. 4. We bury them and then worry. 5. We regret! We lament and say “I won’t let that happen again!” 6. We may have to apologize. 7. Unfortunately, sometimes we are forced to find a new job! Sounds familiar? Most people naturally do the first two steps. But the fear of failure, lack of tools or frameworks, laziness, already-full-plate syndrome (insert excuse here) and it’s on to steps 3 and beyond. But no—not you! This time you decided to pick up this book to learn how to equip yourself with the best tools for managing your personal risks. Thank you for giving it a try. Now it’s your turn to experience the powerful simplicity and relief from worry!

A native of Harrisburg, PA, George holds a B.S. in Aerospace Engineering from The Pennsylvania State University and a M.S. in Engineering from The University of Tennessee. After working in the aerospace and nuclear power business with Aro, Inc. and Bettis Atomic Power Laboratory, George joined GE’s Gas Turbnine division (GTD) in Greenville, SC, as a design engineer. He was soon promoted to Manager – Operational Support in Schenectady, NY and followed that as Manger – International Service Support, travelling extensively to Europe, Saudi Arabia and Egypt. In the mid 80’s, he transferred to Corporate Engineering and Manufacturing as consultant, program manager and educator, all associated with GE’s Management Development Center in Crotonville, NY. During that period he co-developed and implemented Continuous Process Improvement (CPI) across GE. As a result, he requested permission to preserve this important work by publishing it. GE kindly granted permission after which he authored Continuous Process Improvement, published by The Free Press. In 1990, he joined GE Aircraft Engines (GEAE) as Program Manager, Special Continuous Improvement to help integrate continuous improvement efforts with Jack Welch’s “Workout”. During that period, he co-developed a program management system for the NASA High Speed Civil Transport and participated in the Lean Aircraft Initiavtive, in collaboration with MIT. He co-led development and implementation of the Engine Development Cycle/New Product Introduction (EDC/NPI) and Risk Management processes, which soon became recognized as GE best practices. As a result of his work at GEAE, he was asked to join Corporate Research & Development (CRD) to lead the best practices across GE. He created a corporate model and co-led adaptation and implementation across the GE businesses and joint ventures. During that time, he also created a Market Opportunity Assessment Process and integrated Six Sigma tools and techniques into the business model. He was a member of GE’s Corporate Six Sigma Quality team, a Master Black Belt and co-leader of GE’s Corporate NPI/Design For Six Sigma (DFSS) Council. Results of these activities are apparent in many of GE’s product and service offerings, e.g., Lightspeed Catscanner, Performix Xray tube, Digital Xray sensor, CFM56-700 Aircraft Engine for the Boeing 737, GE90 Aircraft Engine, exclusive engine for Bombardier’s Canadair Regional Jet, Spectrum Electric Range, to name a few. After retiring from GE, he joined Navigant Consulting in Palo Alto with focus on Risk Management. Following that venture, he was hired as VP of the Juran Institute, focusing on Six Sigma, NPI and Risk Management. Subsequently he entered private practice and consulted with Rumpke Consolidated Companies, Cincinnati, OH; Griffin LLC, Valdosta, GA. and American Standard/Trane. George taught at the Geenville Technical College, SC and Point Park College, Pittsburgh, PA. He has lectured at Xavier Univ. and trade seminars and authored/delivered technical and business review papers for various societies. George and his wife Donna, a retired RN, are very thankful for the health and unity of their family: three children and eight grandchildren.